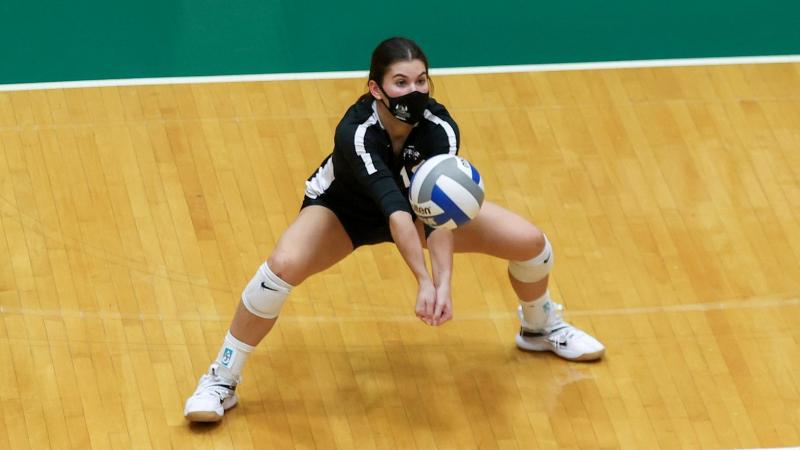 Credit: Cleveland State Athletics
Senior Lindsey Tout returned to action for the final matchup against Wright State after missing most of the season due to injury.

After a long, hard-fought season, the Vikings lost their final match to the Raiders at home, but did not let it go easy.
By COURTNEY BYRNES

In a disappointing end to the season for the team, Cleveland State women's volleyball dropped its final match of the season 3-1 to Wright State.

The Green and White put up a strong fight on their home court but ultimately fell short.

The Vikings last faced off against Wright State on Oct. 15, dropping a road contest 3-0 in what came to be a stretch of six losses for the team.

This time with a home court advantage, CSU held its ground to take the first set 25-20 and kept the final three sets close.

In game one, senior Lindsey Tout forced a timeout by Wright State after serving two aces in a row. Tout finished with three aces in the contest. Junior Audrey McConihe also worked in an ace of her own earlier in the set.

Wright State was able to take an early lead in the second set. The Vikings played a game of catch up for most of the game, but the Raiders held strong and took the set 25-14 in the most lopsided set of the contest.

WSU continued to lead into the third set, but CSU learned from its mistakes and brought a six-point lead game down to just two points. In the end, the Raiders took the win 25-23.

The start of the final set closely resembled the first frame. The Vikings took the lead and held tight. Junior Lydia Latimer mimicked Tout by serving her own set of aces that forced a Raiders' timeout.

The two teams traded leads throughout the game, never allowing more than a three point lead until the last few points. Wright State pulled off a 25-21 victory to end the match 3-1 and the Vikings' season.

As the season wrapped up, the match started with a ceremony to honor the seniors, Tout and Erica Kostelac. Head coach Chuck Voss praised the duo’s final performance.

“Erica had her best match of the year for us and that was Lindsey’s first time playing, she’s recovering from an ACL so we just kind of put her in today and she played well.” Voss said.

Kostelac led the team for the night with 21 kills and 23 points. She recently surpassed 1,000 career kills in a matchup against UIC on Nov. 7.

“It’s very bittersweet, it’s been a long time coming.” Kostelac said about playing her final college game. “Six years is quite a long time to play college volleyball, but I could not have had a better night with my teammates. I think it was fun even though it did not end like we wanted it to, but it was a great way to go out.”