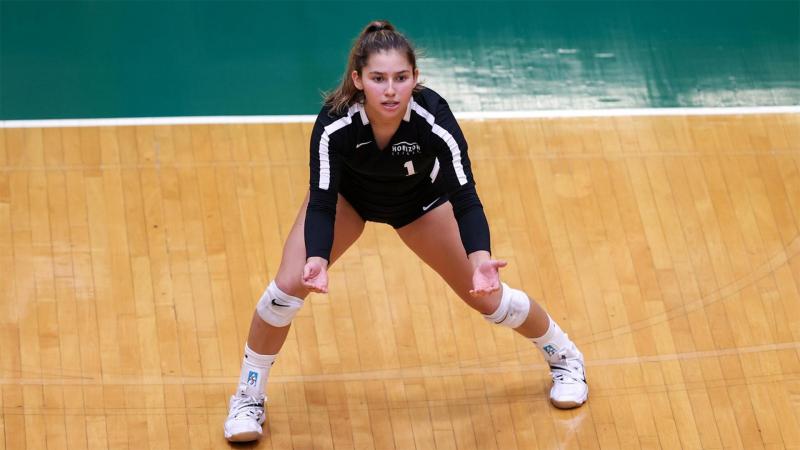 The Vikings season has taken a nosedive with league play.
By JADEN STAMBOLIA

Cleveland State women’s volleyball dropped its sixth straight game as it fell to Wright State and Northern Kentucky on the road last weekend. After an electric start to Horizon League play, the Vikings (6-15, 4-6) have stumbled upon another tough stretch as they continue to mature.

On the season, the Vikings have won 24 of 74 sets played.

Cleveland State’s clash against Wright State (13-6, 5-2) continued to show their struggles with scoring. The Vikings have averaged 13.9 points per set for the season. By the end of the night, the Green and White’s highest-scoring set was 16 points.

In the opening set against the Raiders, Cleveland State took a quick haymaker, falling behind 13-3. Those three points came from a combination of two attack errors from the Raiders and a kill from sophomore Peyton Bloomer.

A kill by Keanna Avery kicked off a 6-3 run for the Vikings. Aided by errors from Wright State and kills by Avery and Erica Kostelac, the Vikings were in pursuit, trimming the lead to 16-9. That spark was not enough as the Raiders eventually strung together a 9-0 run to clinch the first set 25-14.

In the second set, Cleveland State made it tough for the Raiders, battling back and forth for a 6-6 tie. An error and two kills from junior London Portis would give the Vikings a 9-7 lead, and their only lead for the set.

Wright State tied it back up and the two teams went back forth before the Raiders had a one-point lead at 17-16. The Vikings withered after that with Wright State running off on an 8-0 run fueled by five kills and three errors from the Green and White as the Raiders went on to win the set 25-16.

After a gutsy effort in the middle set, Cleveland State mirrored its opening set performance as it fell behind quickly, 9-3. An ace by Lydia Latimer and errors by the Raiders provided those three points for the Vikings.

Multiple kills by Portis, Bloomer and Liberty Torres helped the Vikings crawl back into the contest, trailing 12-10. Unfortunately, the tank ran dry, with the Vikings only scoring four more points as the Raiders rattled off 13 straight points to win the set, 25-14.

Northern Kentucky (11-6, 7-1) provided a somewhat different story for Cleveland State and its scoring. Cleveland State tallied 17 in the first set, 16 in the second, and mustered just 13 in the final set as they were swept again.

In the first set, kills by Bloomer, Kostelac and Ainslie McLaughlin kept the Vikings in it as they trailed 9-6 in the early going. Both teams would sabotage themselves with errors throughout the next few minutes as Northern Kentucky held a 13-10 lead. The Vikings miscues continued throughout the set, as they found themselves behind 19-12.

Bloomer, Kostelac and Abby Miller would try to reel CSU back into it with a trio of kills to make it 23-16. However, that would not be enough as the Norse stayed on the attack, clinching the set 25-17.

In the second set, the Vikings would inch out to a small 7-6 lead, led by Bloomer, who tallied three quick kills. The Vikings and Norse exchanged blows through the middle of the set, keeping it tied 11-11 then 13-13.  Latimer, London and Bloomer continued to keep the Green and White in contention.

However, Cleveland State could not hold back Northern Kentucky from running away with it during a 12-3 stretch. The Norse had three kills to start the run that broke the Vikings’ spirits as they would give up four errors to help Northern Kentucky clinch the set 25-16.

The last set was a heartbreaker that sealed the sweep. The Vikings kept it close in the beginning with kills spread out from the likes of Bloomer, Miller, Torres and Portis to make it an 11-7 game.

However, Cleveland State could not keep pace with the Norse as they came out on top with another set to finish the Vikings off. Down the stretch, CSU allowed a 14-6 run, dooming their hopes at earning a set win over the weekend as they fell, 25-13.

Bloomer led the Vikings in kills during the two matches with 12. Miller had a stellar performance with 31 combined assists and Audrey McConihe chipped in 29 digs within the two matches.

The Vikings look to rebound with a home match against Youngstown State and Robert Morris on Oct. 23-24, then a road trip to take on Oakland on Oct. 29 to finish the month.