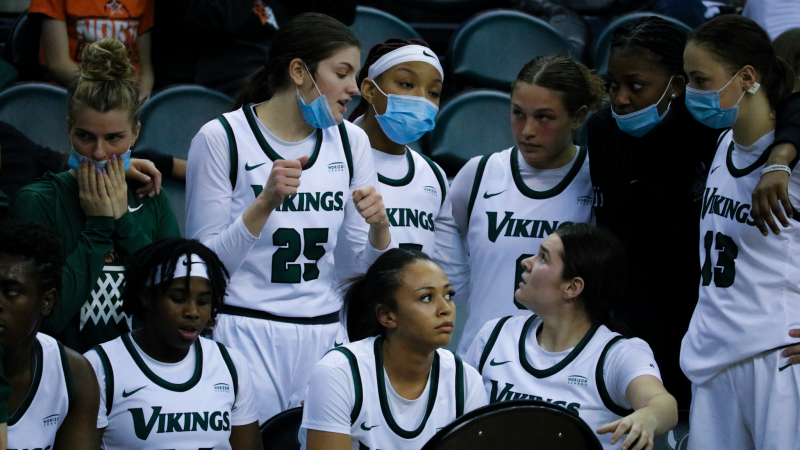 Major changes are coming to both of Cleveland State’s basketball programs now that the season is over.
By TONY PESTA

A wave of change is coming to both of CSU’s basketball programs as coaches and players move on to new chapters after the 2021-22 NCAA season.

Following back-to-back regular season championships, Cleveland State’s men’s basketball team was unable to reach the 2022 NCAA tournament after falling short of their ultimate goal in the conference semifinals of the Horizon League Tournament.

The women’s team faced a similar fate, losing in the championship round of both the Horizon League Tournament and the Women’s Basketball Invitational (WBI) Tournament.

Despite coming up short, both teams enjoyed fruitful seasons. The men’s squad finished with the best record in the Horizon League while the women’s team finished with one of the highest win percentages (71.9%) in program history.

Destiny Leo led the women's team in scoring, averaging 17.8 points and earning a spot on the All-Horizon First Team. Nadia Dumas was selected to the All-Horizon Third Team.

Perhaps the biggest loss for the Cleveland State program though was the departure of the men's head coach after the season ended. Coach Dennis Gates accepted an offer from the University of Missouri, after guiding Cleveland to three of the most successful years in program history, and winning the Horizon League Coach of the Year award in 2020 and 2021.

Cleveland State has begun the search for a new head coach, with current assistant coach Dru Joyce III rumored to be the front runner. Joyce, a former high school teammate of LeBron James, has received the King’s endorsement.

It is unclear how many other candidates are being considered or how long the process to replace Gates will take.

Meanwhile on the women's side of the game, Isabella Geraci, one of the most popular athletes at CSU, has entered the transfer portal as a graduate student to begin a new chapter in her collegiate career. Geraci passed 100 career games at Cleveland State this season.

Others will be leaving because they are seniors. Twelve players on the men’s roster have completed their senior year while four players on the women's side did the same, although some seniors may still have an extra year of eligibility remaining as the NCAA extended this to all collegiate athletes who competed during the pandemic.

Geraci, for example, is using her additional year to enter the transfer portal while other seniors such as Isabelle Gradwell and Barbara Zieniewska are eligible to play another season.

It remains to be seen how many seniors will take advantage of the additional year, but CSU can expect to see major changes to both rosters by the end of next season with so many players nearing the end of their time on campus.

The 2021-22 season was a bittersweet journey for both of Cleveland State’s basketball teams. And while the future is uncertain, what is certain is that these two teams and Coach Gates laid a solid foundation and built a strong culture for whatever comes next for the program.