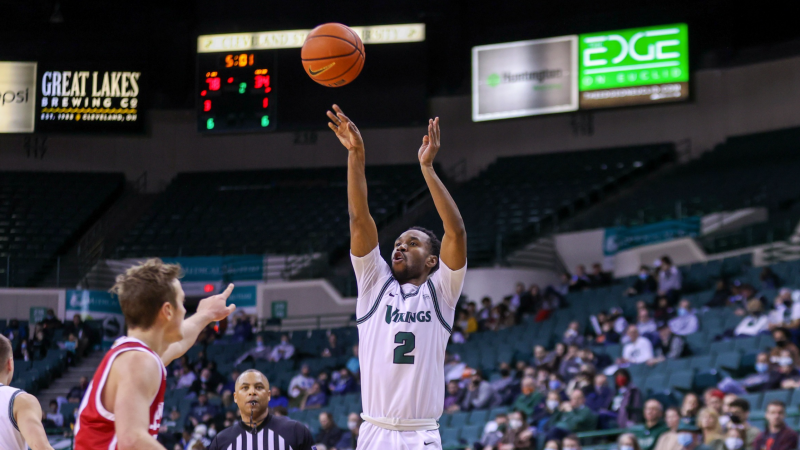 Valentine's Day was heartbreaking for the Cleveland State Vikings as they faltered down the stretch in a triple overtime match with the Fort Wayne Mastodons.

It was senior night for the Mastodons as Jalon Pipkins, a senior for Fort Wayne, scored the game-tying layup before a technical foul helped the Vikings post a 3-point lead with 4.6 seconds remaining in regulation.

The Mastodons then went the full length of the court as Damian Chong Qui drilled a 3-pointer to send the game to its first overtime. The score at the end of regulation, 74-74.

The Vikes found themselves trailing by three points in the second overtime with only 9.2 seconds on the clock. A pump fake in the corner by Deshon Parker freed up an open 3-point shot to force yet another overtime with the score at 89-89.

This unusual game saw Cleveland’s leading scorer and 3-point shooter, D’Moi Hodge, sit for the final 20 minutes of play. Torrey Patton, the Vikings’ second-leading scorer, did not appear in any of the three overtimes.

Their absence was felt as the Vikings began to run out of gas in the final five minutes.

Pipkins finished an and-one layup to start the extra period. The senior played 51 minutes and scored a game-high 27 points as he helped Fort Wayne build momentum at crucial moments.

Purdue built a 4-point lead before CSU rallied back to tie the game behind a 3-pointer from Chris Green, who had not played a single second before that possession.

Jarred Godfrey gave the Mastodons a 97-95 advantage with 30 seconds remaining. The lead increased to 100-95 behind a CSU turnover and missed 3-point attempt from Green.

With the game seemingly out of reach, the Vikings pulled within two points and nearly stole Purdue’s inbounds pass with 1.7 seconds remaining but a foul sent the Mastodons to the free throw line to put the game away for good.

Seven players scored in double digits for the Vikings with Tre Gomillion, Torrey Patton and Deshon Parker all scoring 14.

The Mastodons finished senior night with a 102-98 victory over the top team in the Horizon League.

CSU held senior night in their previous game (Feb. 12) in what was a dominant 83-45 win over IUPUI (Indiana University–Purdue University Indianapolis). Thirteen seniors were celebrated for their role in bringing the Vikings back to relevance during their time in Cleveland.

With the loss to Purdue Fort Wayne, Cleveland State falls to 17-7 overall and 13-4 against conference opponents, maintaining a slight edge in the standings over Oakland who sit at 12-4.

The Vikings have three more games before facing Oakland on the final night of the season, Feb. 26, in a showdown that could determine the final standings.