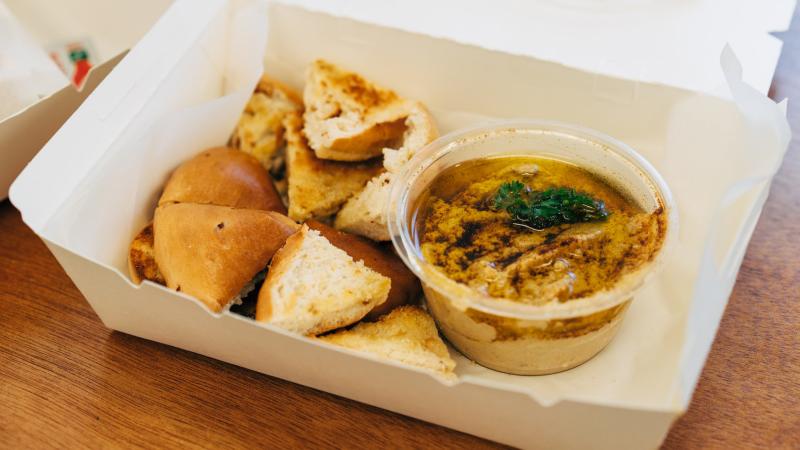 The change is what the university hopes is the first of many in an effort to become more environmentally friendly as the dining department embarks on its new partnership with Aramark.
By JACK GILLESPIE - posted December 21, 2022
Audio file

Cleveland State University has decided to no longer offer single-use takeout containers in the Viking Marketplace.

The university made the decision to move on from the paper boxes in favor of reusable containers. The transition comes under Cleveland State’s dining collaboration with Aramark Higher Education agreed on in May.

This is the first major shake-up to result from the partnership, and according to CSU’s Associate Vice President of Auxiliary Services Nicholas Vande Velde, it won't be the last.

“Aramark had presented numerous ideas for what we might consider green solutions as they took over dining for us,” Vande Velde said. “And the reusable container transition was one of what, I hope to be, many transitions.”

The takeout containers appear to be the first in a line of supplies that the university will no longer use. Vande Velde said the dining department also wanted to end the use of other non-reusable items.

Time -- a crucial word that tailed the last statement from Vande Velde. The administration hopes the community understands that these are changes that are not achievable overnight.

“There is no concrete dates because we're going to do it as we can,” Vande said. “So, as stock becomes available, and as we identify the right steps for us, we're going to make those transitions to reach for a goal of having more sustainable products on campus.”

The reusable containers come with an initial security deposit fee of $10. Some pushback resulted from a misunderstanding about the fee, which was to help ensure containers are returned.

“The cost for the to-go containers is simply a deposit, it's not a cost that the student necessarily assumes is lost money,” Vande Velde said. “When they return their container, they get their money back.”

As part of its sustainability drive, CSU also decided to remove plastic bags from Viking Express locations. Vande Velde said the decision followed a Cuyahoga County ordinance on moving on from plastic bags. Vande Velde added that students are welcome to use their own reusable shopping bag rather than buy one.

With changes such as these, there was bound to be a reaction from the student body.

Riley Soltis is a junior who frequents the Viking Marketplace as it's in the dining plan that comes with living on campus.

“I think it’s great that CSU is moving away from paper and plastic and becoming more sustainable,” Soltis said. “The resulting security deposit fee isn't a problem because I will get reimbursed.”

Not only are the containers more nature-friendly, but their are other upsides as well. According to Soltis, the reusable containers are higher quality and do a better job holding the food.

“I’ve noticed no downside to the new containers,” Soltis said. “They don't get wet and soft like the paper ones and they do a better job of keeping the food warm.”

It appears that the decision to transition to the reusable takeout containers has been beneficial to not only the sustainability of the university, but the quality of service that the students receive.

For more on what's happening in the CSU dining department, visit its homepage.