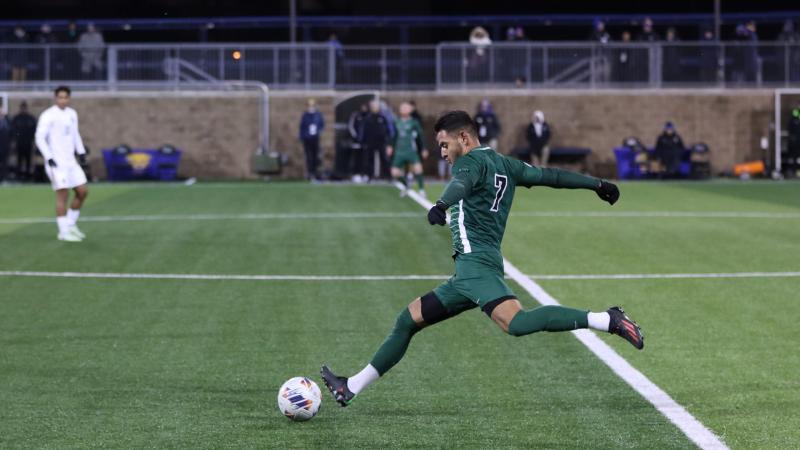 Credit: Cleveland State University Athletics Dept.
Hector Gomez scored the consolation goal in CSU's 1-2 loss to the University of Pittsburgh in the first round of the 2022 NCAA tournament, in Pittsburgh on Nov. 17.

With a Horizon league championship and a taste of the NCAA tournament under its belt, Cleveland State men's soccer is looking to the future with confidence.
By JACK GILLESPIE - posted December 23, 2022
Audio file

Cleveland State’s men’s soccer saw a long journey come to an end at the hands of the Pitt Panthers in the first round of the NCAA tournament in Pittsburgh on Nov. 17.

The Vikings (11-4-5) loss to the University of Pittsburgh (9-4-5) 2-1 was also CSU's first time in ten seasons and first time under head coach Sinisa Ubiparipovic that they made it to the tournament.

The Panthers went 1-0 up in the 27th minute as Bertin Jacqesson converted off a give-and-go from Michael Sullivan. Jacquesson scored again in the 76th minute, finishing off a ball from Rodrigo Almeida and Guilherme Feitosa to make it 2-0.

The Vikings earned a consolation goal in the 88th minute from Hector Gomez to bookend an excellent season that bodes well for their 2023 campaign.

After a valiant effort throughout the season which included the Horizon League championship, CSU found itself is a similar position to the previous year, close to the summit, but with some way still to go.

The NCAA tournament first-round exit saw the end of not only the Vikings’ season, but an accumulation of efforts by the program to break through previous barriers. In doing so, the team was able to do something it hadn’t in 10 years.

Building from a tough end to the 2021 season

A year earlier, a distraught and dejected soccer squad trudged off Oakland Soccer Field, falling short of its ultimate goal; a horizon league title. The Viking’s had just lost 1-3 to the Golden Grizzlies in the Horizon League championship.

The championship appearance was the first for the Vikings in nearly a decade. The accomplishment came with a bitter-sweet satisfaction. The team, going 10-8 and 8-2 in the conference, had its best season in recent memory. However, the sting of losing remained.

Coming into 2022, the Vikings returned 16 of the 27 players on the roster from their previous season. Of those six were seniors, all of them looking to avenge the defeat of the previous year.

CSU started with a convincing 3-0 run. After a loss, win and tie in that order in their next three games, the Vikings notched an impressive 0-0 draw on Sept. 21 with then No. 13 Ohio State in non-conference play before rattling off a five-game winning streak.

The Vikings survived a 0-2-3 end run to finish 9-3-5 (5-1-3 in conference play) and win the Horizon League regular season championship.

The first round of the conference tournament gave the Vikings a second crack at the team -- the Golden Grizzlies -- which ended their season in 2021. However, a repeat looked possible when CSU went into the halftime break down 1-2.

But the Vikings showed the spirit of their moniker in the second half, netting three unanswered goals to take a 4-2 lead they would hold onto through the end of the Horizon League tournament semifinal.

The victory avenged the loss of the previous year, but the Vikings still wanted that elusive conference title.

Only one opponent remained between the Vikings and excellence. One remaining obstacle on the path of redemption from a year ago. They had been here before, and now with an additional 369 days of experience, they looked to get to that mountain top that eluded them the year before.

In the final, CSU faced IUPUI, with the tournament favorite Vikings shutting out the visitors 3-0 at home on Krenzler Field on Nov. 12 to earn the mantle of champions and a berth in the NCAA tournament.

The team's goal for the year was met. The Vikings set out to accomplish something that they set their sights on a year ago and fulfilled that objective. The trip to Pittsburgh, despite the loss, bodes well in 2023 for a team that is hungry and has a taste for further success.