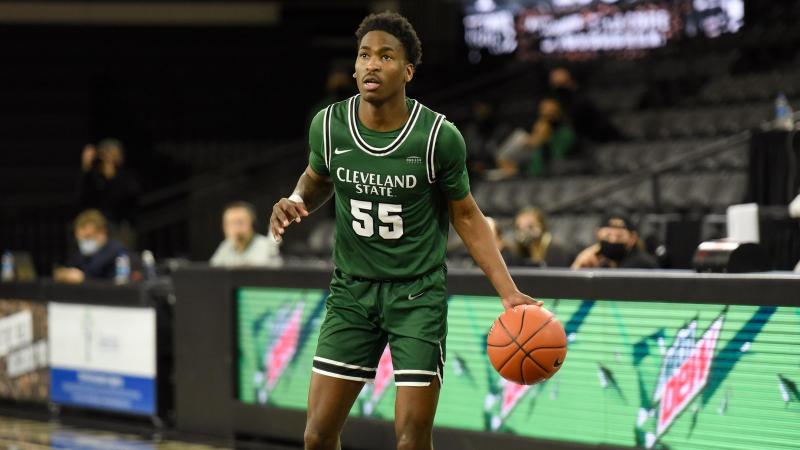 Cleveland State men’s basketball extended its winning streak to four games as it swept Oakland on the road at Athletics Center O’rena in Rochester Hills, Michigan over the weekend.

The Vikings, now 14-5 overall and 14-2 in conference play, made program history, earning their 14th Horizon League victory. The last time Cleveland State won that many conference games was in the 1992-1993 season, when they were in the Mid Continent Conference (15-2).

Cleveland State jumped out of the gate with a 12-1 run. The red-hot Vikings then reeled together a 20-10 run to take a 46-33 advantage into halftime. The first half cushion proved to be the difference as they held off a spirited comeback attempt from the Golden Grizzlies in the final 10 minutes, eventually claiming the victory, 80-72.

Cleveland State received another solid contribution from Torrey Patton, who notched his third double-double of the season, tallying a team-high 21 points and 10 rebounds. Craig Beaudion chipped in with six assists. The unselfishness was on full display as the Vikings tallied 22 assists, including nine of their first 10 made baskets. They also thrived in the open court, outscoring their opponent 23-7 in fast break points.

Oakland was led by Jalen Moore, who tallied his own double-double, finishing with 20 points and 11 rebounds in the loss.

Cleveland State also showed why they have the second-ranked defense in the conference, holding the Golden Grizzlies to just under 40 percent shooting. Meanwhile the offense was clicking for the hottest team in the Horizon League, as the Vikings shot 63 percent from the field in the first half, and finished at a season-high 55.6 percent.

The second string once again stepped up in crucial moments, helping to give the Vikings a 28-8 advantage in bench points and keeping them one step ahead of the Golden Grizzlies throughout the night.

The Vikings continued their streak the following night with a grind-it-out affair against Oakland, eventually staving off a rally to claim the 80-78 victory. The win marked the sixth Horizon League sweep this season for Cleveland State.

While the numbers weren’t as crisp, the Vikings had a slight advantage over the Golden Grizzlies in most categories on the night, including fast-break points (15-9), points in the paint (50-46) and points off turnovers (18-13).

Oakland bested the Vikings in field goal percentage (48.5-54.4) and bench points (19-22). The Golden Grizzlies were cooking in the first half, shooting 56.7 percent before the Vikings cooled them off in the second half with some timely defensive plays.

For CSU, Hodge set the tone early, tallying the Vikings’ first eight points on the night. Cleveland State led throughout most of the first half but were tested with a consistent attack led by Oakland’s Zion Young and Daniel Oladipo. The Golden Grizzlies tandem tallied 18 each to keep Oakland nipping at the Vikings’ heels.

With under 90 seconds to play and the Vikings up 78-76, Cleveland State lost the ball, giving the Golden Grizzlies a chance to take the lead. But the visitors' defensive prowess once again emerged as Gomillion drew an offensive foul while defending a two-on-one fast break at the other end.

Oakland's last chance came with 10 seconds on the clock. Down 78-80, the hosts had the inbounds pass. The first attempt was knocked out of play, and on the second try, the Vikings' Johnson seized the opportunity to put the game away.

Cleveland State brings its four-game winning streak home this weekend against Detroit Mercy at the Wolstein Center on Feb. 12-13, the Vikings final home games in regulation play this season.