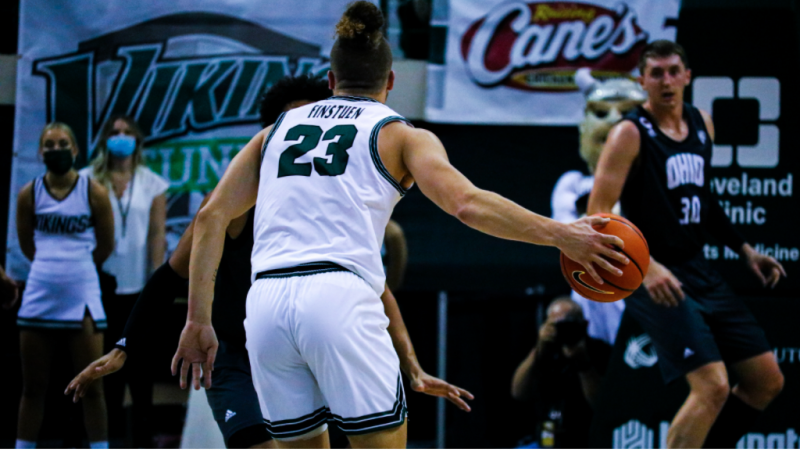 Credit: Matt Thomas
Broc Finstuen led the Vikings with 14 points off the bench, as well as five rebounds and two steals in a loss to OU at the Wolstein Center, Cleveland, Nov. 13, 2021.

Cleveland State fought courageously to halt the running game at home against an experienced Bobcat team.
By ABRAHAM FARRAJ

The CSU men's basketball team fell to Ohio University, 67-56, in their home-opener at the Wolstein Center on Saturday evening. It was a tough loss, as CSU was seeking to come back from a disappointing loss in the season starter last week at BYU.

The Vikings played aggressively in a bid to stifle the momentum of the visiting team, but would come up short in the end.

During the first half, the Vikings (0-2) struggled to keep the ball out of the hands of OU. As a result, the Green and White frequently found themselves fighting from behind. The Bobcats (2-0) had success from three point range, going 7-18 compared to CSU who was 1-9 from beyond the arc.

More adversity followed when Craig Beaudion was helped off the court after coming down hard on his left leg.

“It was a high ankle sprain to my knowledge,” head coach Dennis Gates said after the game. “He pretty much came down on it ... I don’t know the extent of it, but that’s what we know right now.”

CSU went to the locker room looking to regain their composure and rally their defense in order to claw back at the deficit.

In the second half, reserves Yahel Hill and Broc Finstuen found themselves pacing the Green and White. Hill was responsible for nine points, three rebounds, three assists and a steal in the period. Finstuen would put up six points to set a path for his team-leading total of 14 points on the night.

It was close down the stretch, but the Vikings were outscored, 32-31 in the second half for the 11-point loss.

The Vikings will seek their first win of the season when they host Edinboro on Tuesday, Nov. 16 at 7 p.m. at the Wolstein Center.