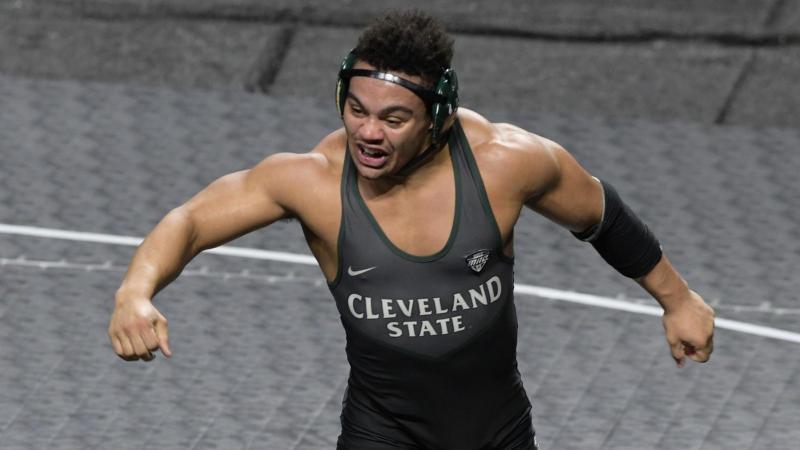 Credit: CSU Athletics Department
DeAndre Nassar picked up four wins over the two days at the MAC Championships, becoming one of three wrestlers from CSU to qualify for the NCAA Championships.

The Cleveland State wrestling team wrapped up action at the 2021 Mid-American Conference Championships on Feb. 26-27 with Marcus Robinson, DeAndre Nassar, and Ben Smith qualifying for the NCAA Tournament.
By ABRAHAM FARRAJ

Three Cleveland State wrestlers have earned a trip to the NCAA tournament after their performances at the Mid-American Championship. Marcus Robinson, Ben Smith and DeAndre Nassar are headed to St. Louis, Missouri next week, along with any CSU wrestlers who earn at-large berths.

After the first day of action at the MAC Championship, Cleveland State stood fifth in the team standings with 56.5 points, just one point behind fourth place Northern Illinois. Leading the team standings after day one was Missouri with 161.5 points.

At 149 pounds, Marcus Robinson, who entered the weekend as the No. 6 seed, picked up three wins on Friday to advance to the championship match.

In his opening round contest, Robinson earned a 3-1 decision over Rider's Wyatt McCarthy, before earning a 9-5 decision in an upset over third-seeded Tyler Vath of Edinboro in the quarter-finals.

Robinson then picked up another major win in the semi-finals, earning a 5-1 decision over second-seeded Anthony Cheloni of Northern Illinois.

At 197 pounds, Ben Smith was wrestling as one of Cleveland State's highest seeded participants, earning the No. 4 seed prior to the weekend's championship.

After a bye in the opening round, Smith grabbed a 3-2 decision over Central Michigan's Landon Pelham in the quarter-finals, before defeating top-seeded Greg Bulsak of Clarion with a 12-5 decision in the semi-finals.

In addition to Robinson and Smith, the Vikings had two more wrestlers make it to the semi-finals of their respective weight classes, as Riley Smucker picked up wins at 165 pounds, while DeAndre Nassar also earned wins at 184 pounds.

Nassar, who was wrestling as the No. 4 seed, picked up an 8-3 decision over Lockhaven's Colin Fegley in the opening round and then earned a 3-2 decision over Clarion's Max Wohlabaugh in the quarter-finals. Nassar's semi-final match pitted him against top-seeded Brett Wilson from Northern Illinois, with Wilson earning a 12-3 major decision.

After entering the 2021 MAC Championships as the No. 6 seed, Smucker picked up a pair of wins in his first two matches before yielding in the semi-finals of the 165 weight class.

In the opening round, Smucker posted a 4-2 decision over SIUE's Chase Diehl, and then earned a 6-4 decision over third-seeded Colt Yinger of Ohio in the quarter-finals.

Smucker was then matched up against second-seeded Izzak Olejnik of Northern Illinois in the semifinals, with Olejnik picking up a 9-3 decision.

The final Viking to win a match in the main contest was Daniel Patten at 157 pounds, as he earned a 7-1 decision over seventh-seeded Anthony Gibson of Northern Illinois in the opening round. Although he would ultimately fall in the quarter-finals, Patten also picked up a 6-2 decision over Clarion's Taylor Ortz in a consolation match.

Robinson advanced to the championship match at 149 pounds, where he went up against top-seeded Brock Mauller of Missouri.

Robinson came up short in the final match of the weekend, dropping a 6-0 decision against Mauller to finish as the 2021 Runner-Up.

Smith was matched up against second-seeded Rocky Elam of Missouri. Smith would fall shy in the final match of the weekend, dropping a 10-4 decision against Elam to also finish as the 2021 Runner-Up.

Nassar then went the distance in his final match of the weekend, as he battled for a 5-3 sudden victory decision over Clarion's Wohlabaugh to earn the third and final NCAA automatic qualifying spot for the Vikings.

Smucker dropped his final match of the championships though, losing to Alex Cramer of Central Michigan in the consolation finals.

Patten also picked up a consolation win for the Vikings on Saturday at 157 pounds.

Cleveland State finished the weekend in sixth place with 68 points.

The Vikings have finished in the top-half of the championship standings in each of its first two years as a member of the MAC.

Robinson, Smith and Nassar --  along with any other Vikings who earn at-large berths -- will now compete in the NCAA Championships which begin March 18 in St. Louis, Missouri.