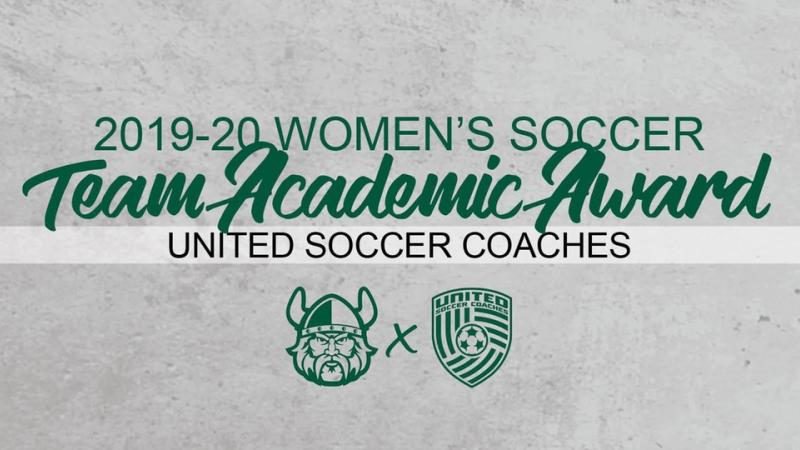 Credit: Viking Athletics
This marks the 13th time the CSU women’s soccer team has been awarded the Team Academic Award.

The United Soccer Coaches honored the team for the 12th consecutive year and 13th time.
By NOAH NICKOLI

The Cleveland State University Women’s Soccer Team has again been recognized by the United Soccer Coaches with the Team Academic Award.

Senior Essence Canady spoke about the expectations that team members have for themselves in the classroom.

“Each year, winning the Academic Award is a prominent goal we have in the Cleveland State women’s soccer program,” Canady said. “Our coaches alongside the entire athletic department makes it a point for all athletes to put academics above everything else, molding us into scholar-athletes. That is why I chose Cleveland State University.”

This year marks the 13th time overall and 12th consecutive year the Vikings have been honored with the Team Academic Award.

Coach Dallas Boyer said his players' education is the first and most important priority.

"This is an annual reminder of the real priorities of what this program is and will always be centered around," Boyer said. "The real commitment to academics and starting these awesome young women on a path towards their selected occupational paths is the thing we take the most pride in.”

Coach Boyer also gave credit to  Academic Adviser Winnie Lane as being a big part of the team's success off the field.

To be eligible for the College Team Academic Award teams must be an active member of the United Soccer Coaches College Services Program with a composite GPA of 3.0 on a 4.0 scale for all players on the roster for the academic year.