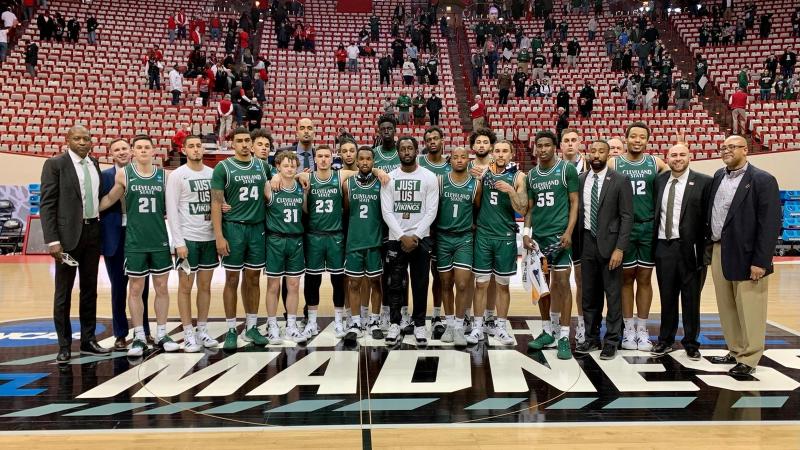 "These guys had a lot of faith, and they poured [it] into each other without knowing what they would get back in return, and I’m proud of them for that," Vikings head coach Dennis Gates said after the team's 87-56 loss to the University of Houston.
By ROBERT FENBERS

After a fleeting appearance at the ball, Cinderella is heading home.

Cleveland State’s magical run came to an ugly end Friday night as it was blasted in the second half by the University of Houston, eventually falling 87-56 in the Midwest Regional first round of the NCAA tournament, at Simon Skjodt Assembly Hall in Bloomington, Indiana.

The No. 2 Cougars (25-3), the third best rebounding team in the country, crushed No. 15 Cleveland State on the offensive boards, gobbling up the second chance possessions. The bolted out of the gate with a 7-2 run in the first four minutes of play and kept the Vikings in an endless hole as Houston never let up, going on to outscore the Vikings 50-27 in the second half.

Houston out-rebounded Cleveland State 38-24, including 16-7 on the offensive glass. They tallied 24 second chance points and 26 points in the paint.

The only downside on the night for Houston was senior guard Dejon Jarraeu who left the game in the opening minute with an apparent hip injury.

Cleveland State (19-8) knew it needed to play a rugged and aggressive style to have a chance, and it did, at least early.

Under back-to-back Horizon League coach of the year Dennis Gates, the Vikings (19-8) mixed and matched their defensive sets, trying out the full court press before switching into a zone defense.

CSU hung tough as each of their starting five chipped into the early deficit, including a pair baskets in the paint from Deante Johnson, cutting the lead to 16-14 with 7:46 left in the first half.

The game was shaping up to be a battle down low.

“It was really physical,” CSU senior guard Torrey Patton said. “They played really aggressive. That's something they pride themselves on, and we were trying to go out there and be just as tough as them. It definitely was a high level of intensity.”

CSU's first half comeback was cut short when Houston strung together a 7-0 run as they continued to dominate the glass.

“They had their offensive rebounds and that kept us from getting in transition, Gates said. “Whenever you have a team that crashed three, four guys and you can’t come up with the basketball, then at that point you can’t run in transition and soften up their defense... I thought their length bothered us as well, and their athleticism. This was a great team, man, and they protected the rim.”

Houston took a 37-29 edge into halftime.

Coming out of the break, Houston exploded for another run, this time 12-2, including 3s from Sasser and Grimes to distance themselves from the pesky Vikings once and for all.

Gates’ admiration for his mentor, Houston head coach Kelvin Sampson, is well-documented and he continued in that vein after the game.

“I will be curious to watch the next five games that Houston will have,” Gates said. “That team is really good. I don’t think they get the credit they deserve. I think they are a number one seed… The things they were able to do, you cannot mimic. We don’t have that length and that athleticism.”

“We knew coming into the game they were a really good team, and we learned that going out tonight,” Patton said. “They played really aggressive on defense. Real stingy on defense, we know they have great scorers, they definitely have a chance to, you know, win the whole thing.”

The senior year experience is something Patton will cherish.

The Vikings gave walk-on Ben Sternberg a March Madness memory when Gates put him into the game with minutes to go. Sternberg rewarded the gesture, scoring a pair of free throws in the final minute of play, receiving the same cheers from his bench he had been delivering all season long.

In a season that ended with Gates’ name in a handful of coaching searches, he praised the players for their continued commitment to the core values of the program.

“It’s crucial because it’s in their hearts,” Gates said. “These guys really wear that on their chests proudly. Sometimes as young people you don’t have direction, or you don’t have full transparency… These guys had a lot of faith, and they poured [it] into each other without knowing what they would get back in return, and I’m proud of them for that, because those are the things that will carry them beyond this fleeting moment of college.”

Houston entered the tournament as one of only four teams to rank among KenPom.com’s Top-20 national leaders in both offensive and defensive efficiencies - No. 8 offensively (119.6) and No. 16 defensively (89.4). The Cougars face Rutgers on Sunday after the 10-seeded Scarlet Knights defeated 7-seed Clemson, 60-56.