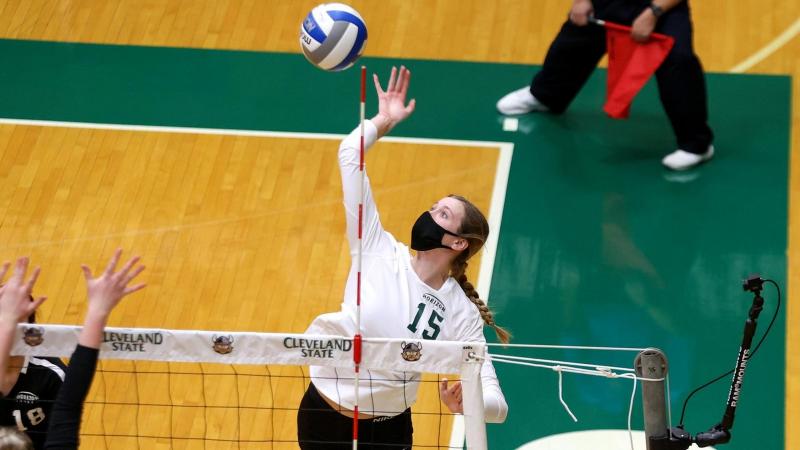 Credit: CSU Athletics
Peyton Bloomer led the Vikings’ offense over the weekend and leads the team overall with 55 total kills.

The Vikings struggled to salvage all three games over the weekend in their 3-2 and 3-0 losses to MSU and Evansville on Sept. 3 and 4.
By ABRAHAM FARRAJ

The Cleveland State women’s volleyball team (2-4) won one of three games during the second weekend of the 2021 season, wrapping up the Eagle Challenge.

On Friday, Sept. 3 the team came away with a 3-1 victory over Radford, while dropping their second game against Morehead State, 3-2. On Saturday, Sept. 4 the Vikings would look to take two out of three during the Eagle Challenge, but came up short as they lost to Evansville, 3-0.

This challenge was the second of four preseason tournaments for the Vikings this season – all four on the road – as the Vikings prepare for their 2021 campaign with a 14-match road swing.

During the opening set, the Vikings jumped out to an 11-3 lead following a six-point run that was capped off by a pair of kills from Peyton Bloomer and Erica Kostelac. CSU then extended its lead to 17-8 on a Chelsea Penfield kill, and maintained the advantage for the remainder of the frame to secure the 25-18 first set victory.

Cleveland State gained a sizable lead midway through the second set at 15-7 following a pair of Radford errors and a Sarah DeGeorge kill. The Vikings then held Radford to just four more points during the set, as the Green and White earned a 25-11 second set victory after posting the final five points.

After dropping the third set, Cleveland State  rebounded during the fourth frame, once again having the high ground at the midway point with a pair of kills from Abby Miller and Keanna Avery and a Penfield and Miller block that held the score at 15-11. The Vikings were then able to gain a 23-19 advantage on another Kostelac kill, but Radford answered with three straight points before the Viking defense forced the Highlanders into back-to-back errors to close out the frame and earn the four-set victory.

With the win, the Vikings improved to 4-0 all-time against Radford.

In the opening set, the two teams traded leads throughout the frame, until the Vikings were able to regain control at the 23-21 mark after scoring three consecutive points, and then earned set point on a block from Ainslie McLaughlin and Madalynn Butler. Although MSU responded with the next point, CSU was able to put the frame away with a kill from Liberty Torres for the 25-22 first set victory.

The Vikings then dropped the next two sets before evening the match with a 25-20 victory during the fourth set. During the frame, Cleveland State was able to gain an early advantage at the 6-3 mark on a kill from Penfield, before extending the lead to 17-13 on a Bloomer kill and MSU error. Cleveland State then held this advantage for the remainder of the frame, closing the fourth set win with another Bloomer kill.

Although the Vikings were able to send the match to a fifth and deciding set, the team came up short in the final frame of action, as the Eagles came away with a 15-11 win.

The Cleveland State volleyball team wrapped up action at the Eagle Challenge Saturday, dropping a 3-0 match against Evansville.

Torres and Penfield both recorded six kills on the day to lead the Viking offense, while Audrey McConihe and Miller both put up a team-best of nine digs in the match. Torres, Penfield, Bloomer and McLaughlin each finished the day with two total blocks.

After the first two weekends of the 2021 season Bloomer leads the Vikings with 55 total kills, while McConihe has a team-high 73 total digs for the year. Miller is averaging 7.41 assists per set, while Miller and Penfield have combined for 26 total blocks through the first six matches.

Next up for the Vikings is the Colgate Invitational on Friday, Sept. 10 and Saturday, Sept. 11, with Cleveland State facing Princeton, Hofstra and Colgate over the two-day tournament.