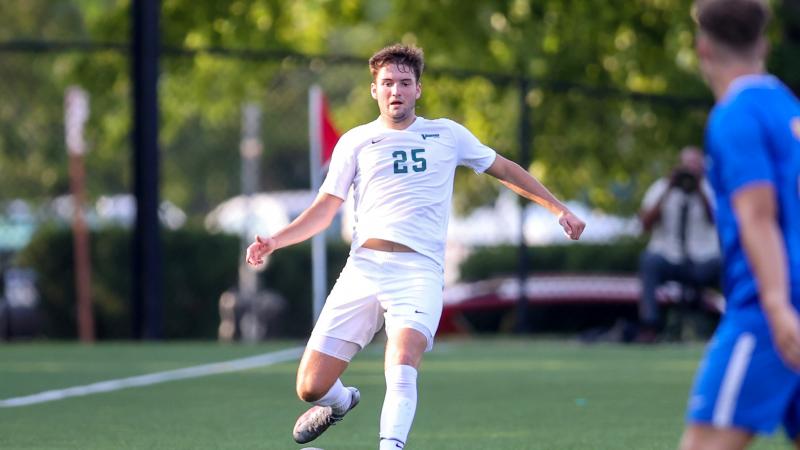 Credit: Cleveland State Athletic Department
Cleveland State came up short during their trip to Ohio State on Sept. 21, falling to the Buckeyes, 2-0 in nonconference play.

The loss breaks a three-game winning streak for the Vikings.
By ROBERT FENBERS

Cleveland State men’s soccer broke its three-game winning streak on Sept. 21 as it fell to host Ohio State, 2-0, in a nonconference matchup.

The Vikings (3-3-0) were riding high heading into Columbus, and that confidence continued into the first half as CSU held firm with the Big Ten powerhouse. The Buckeyes and the Vikings each tallied three shots in the first 45 minutes of play.

Cleveland State held firm into the second half, but began to wear thin as the Buckeyes exploited a seam in the Vikings defense. That persistence paid off as Ohio State (3-3-1) came away with their first goal in the 68th minute of play after Laurence Wootton capitalized on a cross from Channing Chasten. The Buckeyes cushioned their lead in the 82nd minute after a miscue from CSU led to a goal from Devyn Etling.

Cleveland State tallied seven shots, including three from sophomore Bojan Kolevski. Ohio State notched 13 shots, including seven shots-on-goal. The Vikings mustered just one shot on goal, which came from Kolevski. The Buckeyes had a multitude of chances to increase the lead, tallying seven corner kicks while the Green and White had just one.

The Vikings remain undefeated in Horizon League play (2-0-0) and will return to action on the road, taking on defending Horizon League Tournament champion, Milwaukee. Cleveland State won the previous two meetings with 1-0 shutouts.