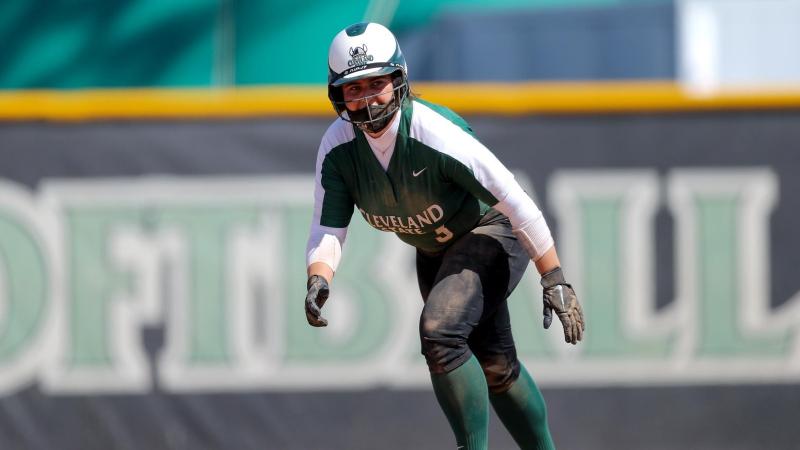 Credit: CSU Athletics Department
CSU avoided a YSU shutout when Junior outfielder Aly Packish was struck by a pitch with the bases loaded to make it 6-1.

The Vikings dropped a pair of games against the Youngstown State Penguins on Tuesday, falling 8-1 in the opening contest before a 9-1 setback in the nightcap.
By ABRAHAM FARRAJ

The Penguins had their way as they jumped out to an early 3-0 lead and never looked back, capitalizing on five Cleveland State errors and holding them to just three hits throughout the first game.

Torrie Jenkins recorded the Vikings' first hit of the day with a single to right center in the third inning. The following inning, Sydney Bajusz would smack a leadoff triple to the right field corner, marking Cleveland State's first triple of the season. Taylor Duncan walked to put runners at the corners, but YSU starter Elle Buffenberger struck out the side to keep the Vikings scoreless.

In the top of the fourth, the Penguins put runners on first and second due to back-to-back errors before second baseman Jenna Deang turned her first career double play on a hard-hit ball up the middle, getting the out at second before throwing it across to first baseman Becky Huroski for the turn.

Trailing 6-0 in the fifth inning, the Vikings loaded the bases when Hurosky drew a leadoff walk, Kaelin Ettinger would follow by being hit by a pitch, and Alexa Sieger reached third on a fielding error by the third baseman.

CSU avoided the shutout after Aly Packish was struck by a pitch to walk in the run and make it 6-1, but an inning-ending groundout would dash the hopes of a rally.

Courtney Fernette smashed a single down the right field line in the sixth frame, marking the Vikings' third hit of the ballgame. However, it would not be enough to get anything going and the team would have to look forward to the second contest of the day as they fell to Youngstown State 8-1.

Following a six-run third inning from the visitors, the Vikings fought hard to come back.

In the bottom of the third, Kiera Frascone drew a one-out walk before swiping her team-leading 11th stolen base of the season and advancing to third on a Bajusz single to right field.

With Packish up to bat, Bajusz successfully stole second as the attempted throw from the catcher sailed into the outfield, allowing Frascone to score from third. Bajusz moved to third on the passed ball before Sieger walked to put runners at the corners with two down. But Penguins hurler Maddi Lusk halted the threat with a strikeout.

Hanna Griffin made her second appearance of the day midway through the third inning and tossed 2.2 scoreless frames in relief, retiring all eight batters she faced while punching out a pair.

Youngstown State’s early lead would power them to a 9-1 victory and a two-game sweep in a six-inning affair.

The Vikings began an eight-game road trip on Friday, opening with a four-game series at Oakland.