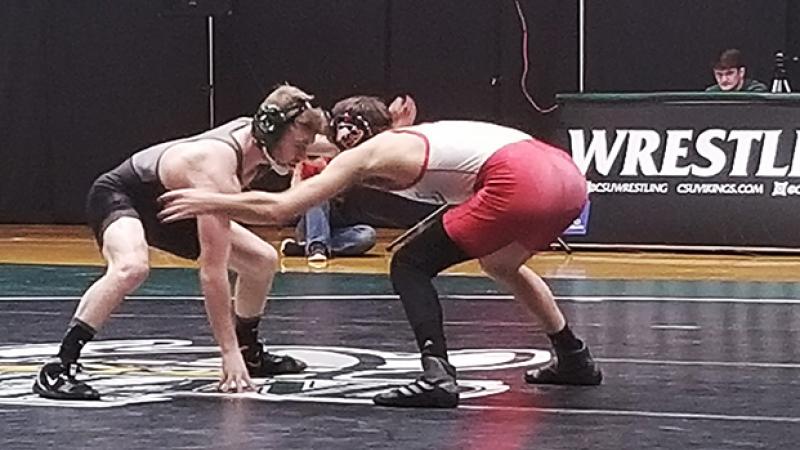 Photo by Ben Hercik
Cleveland State’s Justin Patrick (gray and black) takes on Caleb Brooks of Northern Illinois University in a match that Patrick would win 4-3 on a last-second takedown.

The Cleveland State University wrestling season is drawing to a close with a win against Bloomsburg University and a loss to Michigan State University. All that the team has left for the season is the Mid-American Conference (MAC) Championships at the end of March.
For the first time, this year Cleveland State’s wrestling team competed in the MAC. The MAC added seven teams, including Cleveland State, to the conference this year for a total of 15 teams. Other varsity sports at Cleveland State compete in the Horizon League.
The team finished with a record of 9-6, a big step up from their 4-12 record last season. The Vikings have also competed in additional open meets for individual records during the season at the Cleveland State Open, Clarion Open, Ohio Intercollegiate Open and many others.
Nearing the end of the season, Cleveland State sits at number four out of eight teams in the West Division of the MAC conference standings.
The Vikings have added a few new wrestlers to the team including redshirt senior Justin Patrick.
Patrick is a recent transfer student from the University of Buffalo, a fellow MAC conference competitor. He has had a winning season so far with a personal record of 18-11 and seven victories in his last ten matches. The MAC also featured Patrick in its updated individual rankings, coming in at sixth at 133 pounds.
“We are just about to finish up our regular season, and we are getting prepared for the postseason in March,” Patrick said. “From a team standpoint, we will finish with a winning record, and I would say it has been a very successful year.”
Although the Vikings hold a winning record and have a strong roster, this season has been a huge adjustment for Cleveland State wrestlers competing in the larger MAC.
Redshirt junior Mike Santillo said he believes this season has been more challenging adjusting to a bigger conference. However, he is optimistic about what the rest of the season holds.
“The hardest part of the season was being in a much bigger and better conference,” Santillo said. “The projected outcome is that we will have a few national qualifiers and possibly an All-American on our team, but right now everyone is looking forward to our conference tournaments.”
Cleveland State will conclude their season in the MAC Championships March 7 and 8, hosted by Northern Illinois University in DeKalb, Illinois.
At the tournament the wrestlers will be competing to earn a birth to the the NCAA Tournament.