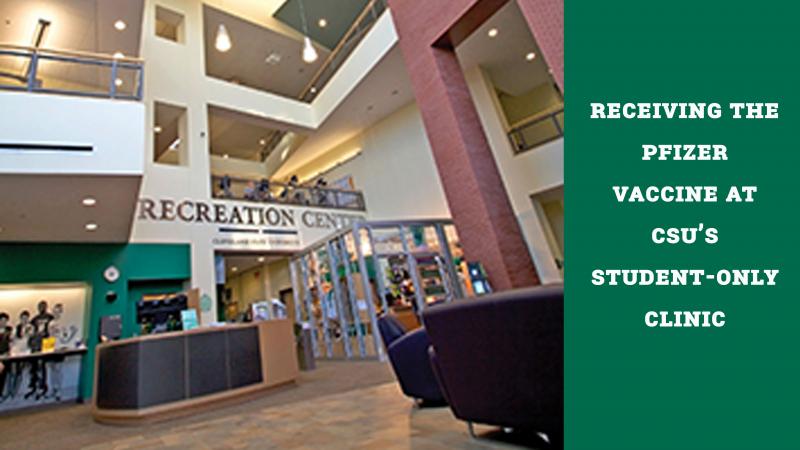 A journey to get vaccinated at CSU’s student-only center

A walk through of my experience getting the Pfizer vaccine at Cleveland State University.
By COURTNEY BYRNES

The announcement on April 6 that Cleveland State University was opening a student-only vaccination center could not have come at a better time for me. I had just spent the early part of the week searching for an appointment at the Wolstein Mass Vaccination Center with little luck.

I immediately jumped at the opportunity to get the vaccine at CSU and scheduled my appointment for April 16 to get the Johnson & Johnson shot.

Then just a week after the original announcement, Cleveland State paused the student-only vaccination center on April 13 at the recommendation of the state of Ohio due to reports of extremely rare blood clotting cases in six women who received the Johnson & Johnson shot.

With just three days before my scheduled appointment, I was now uncertain of when and where I would get my vaccine but grateful that the safety of the vaccines was being taken seriously.

Almost another week went by before I got the announcement that the student clinic would reopen, now with the Pfizer vaccine. I tried my luck with scheduling another appointment for April 21.

Finally, the long awaited day had come and I drove downtown for my 2 p.m. appointment. I was very excited to say the least, partially for the free parking in the East Garage, but mostly to begin my vaccination journey.

An attendant let me into the garage, I parked my car and then made my way towards the Recreation Center.

Now to be completely honest, I have not been to the REC Center since my first semester at CSU in 2019, so I got a little lost.

To avoid making the same mistakes I did, if you park in the East Garage, just walk along Chester Avenue to the front of the REC Center and enter the front doors. If you are coming from the other end of campus, follow the InnerLink almost to the end and then take the stairs down to the main lobby of the REC Center.

From there, I was let into the center by a REC employee and walked straight back to where I could see a table set up for check-in. After confirming my appointment, I was led into a gym with rows of desks and two large screens displaying the time.

Once I sat down, two workers with a computer on a rolling cart approached me, asked some questions and gave me more information about the vaccine shot I was receiving.

Then a woman in a white coat rolled up next to me with her cart of medical supplies and calmly spoke to me as she wiped my shoulder with an alcohol swab and stuck the needle in my arm. I only felt a slight pinch and it was over.

She placed pressure on the injection site as she reached for a Band-Aid and explained that I would have to sit there for 15 minutes, that was what the large screens displaying the time were for, and if I felt any side effects other than a little soreness to raise my hand and they would check on me.

She then moved on to the next person and two more people approached me with a computer to schedule my second appointment in three weeks.

I sat there for 15 minutes, reading through the Fact Sheet and “What to Expect after Getting a COVID-19 Vaccine” handouts they gave me to make the time go by. Then after my time was up, I was feeling good so I gathered my things and walked out.

The rest of the day, I made sure to drink plenty of water to help ease any side effects. I had some arm soreness for two days following my shot, but stretching helped to alleviate this.

By the third day, the soreness was gone and I was feeling better than ever, knowing I was on my way to protecting myself and others by taking the necessary steps to end this pandemic.

To schedule your own vaccination appointment, go online here. Students can use the access code provided to them in the university email sent out on April 19 to schedule for the student-only clinic.