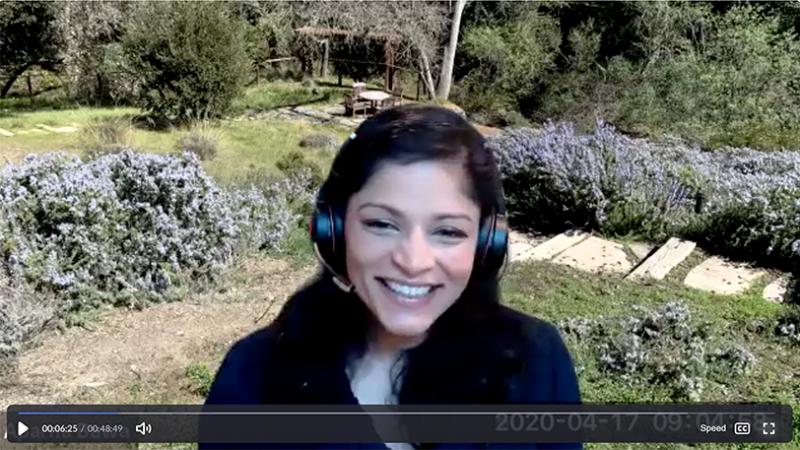 Aparna Bawa, chief legal officer of Zoom, joined more than 200 students and faculty for a virtual event hosted by the Cleveland-Marshall College of Law on April 17.

The Harvard Law graduate initially accepted an invitation from Dean Lee Fisher of the Cleveland-Marshall College of Law to speak in his small class, “The Habits of Highly Effective Lawyer-Leaders.”

Once he learned that Bawa would be accepting the invitation, Fisher and President Harlan Sands decided to open the event to the rest of the Cleveland State community.

Fisher said in an email interview that, although he thought a response from the woman he dubbed, “the busiest lawyer in the world” would be unlikely, he’d found success making cold calls in the past and thought, “Why not?”

“To my pleasant surprise, she answered my email within 24 hours and we spoke on, of course, a Zoom call. I was thrilled she said 'yes,'” Fisher said. “She said that we are the only law school in the country who reached out to her.”

As chief legal officer of Zoom, Bawa has found herself thrust into the forefront of one of history’s fastest business-scaling operations in response to the coronavirus pandemic, which began in Wuhan, China in December 2019.

Zoom, a video teleconferencing software company founded by Eric Yuan in 2011, saw approximately 10 million daily users when the first cases of COVID-19 began to emerge. Just four short months later, that number has skyrocketed to more than 250 million daily users. Zoom’s success in accommodating the drastic uptick came as a surprise to many, even Bawa.

“I’ll be honest with you, I’m so surprised that our infrastructure team has been able to handle the capacity increase,” she said. “I mean, we’re in the middle of a pandemic; servers aren’t lying around waiting to be purchased.”

According to Bawa, the challenges she and her team face are not only a result of the sheer volume of traffic to their site, but also the shifting customer base. She explained that — although there were a small number of customers using Zoom for socialization with family and friends — the application saw most of its use coming from other businesses.

Bawa pinpoints the cause of this shift as being Zoom’s offer to use its platform to support K-12 schools in their transition to remote learning.

“Our intention was to keep education going and provide some stability for education in the United States, which is a key value for Zoom,” she said.

An unintended consequence, she explained, is that every parent is now aware of Zoom’s existence and have begun using the platform for recreational gatherings and activities.

This shift from a business-use to a consumer-use product required Zoom to implement more user training, education, and — as Bawa put it — “hand holding.” One of the first ways in which Zoom had to adapt was by rewriting their privacy policy from densely worded legalese to language average users could understand.

“You have to talk to businesses differently than you talk to the average consumer; no shame in that, it’s just a fact of life,” she said. “Communication is at the core of everything you do as a business… and communication is so dependent on the audience you are addressing.”

Enhancing security measures while maintaining a simple user experience is among Zoom’s chief priorities as the company continues to scale at breakneck speeds, Bawa explained.

“Our product design philosophy had been for a long time — as it is with most tech companies — a frictionless collaboration tool that doesn’t put a lot of steps in the way of getting you connected to other people,” she said. “We still care about that, but we want to make sure that its secure and has the right privacy principles that at least give the user a choice in how to protect themselves.”

Fisher asked Bawa to relay to his students some leadership lessons she has learned throughout the course of leading her company’s response to the coronavirus pandemic.

“Make sure that the statements you are making are things that you can live by and stand behind...be true to your principles,” said Bawa. “In those times where there's just so much information coming at you from all angles…go back to your core values and your core principles…”