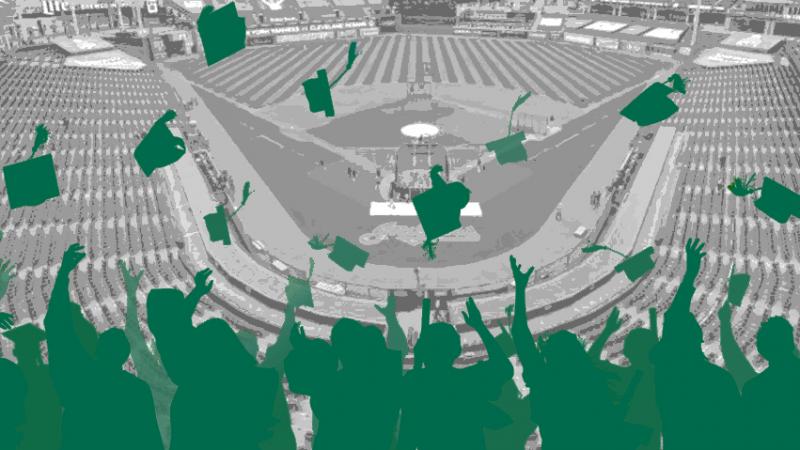 Credit: PngKit.com | Jason Miller, gettyimages
Cleveland State university will hold an in-person commencement on May 15 despite the ravages of COVID-19. The event will be held at Progressive Field with help from the Cleveland Indians.

In-person commencement for spring 2021 and COVID-19 updates were highlights from the CSU senate meeting on March 3.

Cleveland State President Harlan Sands reported to the CSU Senate that the university would hold an in-person commencement on May 15 at Progressive Field with help from the Cleveland Indians.

“There are going to be restrictions but one of the main reasons we feel comfortable doing this is because we have done such a good job collectively keeping our campus safe up to this point,” Sands said.

COVID-19 restrictions will include limiting guests and limiting people on the field. The school is holding two sessions, one in the morning and one in the afternoon.

The Senate heard that campus is in a good place with low positivity numbers for COVID-19, which at 0.36% is one of the lowest in the country.

However, Sands said it was too early to talk about whether campus would be fully open in fall 2020.

“At CSU we have been responsible. We are not going to make an announcement like Cincinatti saying they will return to all normal classes,” the president said. “We will look at the campus footprint and the data to see what our appropriate on-campus presence will be like in the fall.”

The president noted that when he came to CSU the university was facing a potential 20 million dollar structural deficit and now two years later CSU is in a strong cash position.

“According to the CFI, CSU is ranked at a 4.2 which is the fifth highest among the 15 spots which puts us in a very good position,” Sands said.

SGA President Renee Betterson announced that the election for the next SGA president has started. Campaigning began on March 3 and will continue until March 30.

SGA also had their first in-person tabling event in collaboration with the Graduate & Professional Student Association.

“We had one on campus tabling event so far and we had a great turnout,” Betterson said, “Dozens of students came by to learn about organizations and also get cool prizes.”

CSU is going through some changes but the senate is very hopeful for the future.

Editor's note: President Sands also addressed the attention local media have been paying to a recent HR hire. The Stater published separately on that story.