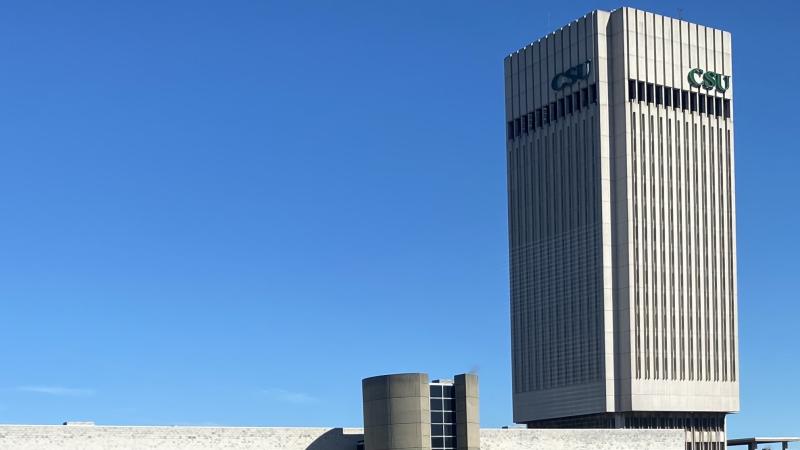 CSU's new master plan is just that - a plan

Cleveland State President Laura Bloomberg, Ph.D. reminded the faculty senate that the master plan is not yet approved by the board nor is it going to happen for certain.
By KIRSTEN BEARD - posted December 12, 2022

Faculty senate members at their Dec. 7 meeting heard more about the new Cleveland State University master plan, were informed that the interim provost is now provost and that rats and insects have taken up residence in Rhodes Tower.

President Laura Bloomberg, Ph.D. revisited the CSU master plan she presented to the board of trustees Nov. 17 to clarify for faculty some of the details surrounding the ambitious revamp of the university.

Bloomberg reminded the senate that the $650 million dollar plan at this point was just that.

“It's a plan. It's not a certainty… We’ve had campus master plans before. It is aspirational,” Bloomberg said. “It is envisioned to be a ten-year plan.”

Whether and how the plan goes ahead depends on the board of trustees.

“[It is] most important to note is that the board of trustees heard the presentation," Bloomberg said. "They have not approved the plan."

Bloomberg added that funding for the plan would not impact CSU's current budget, which is operating at a multimillion dollar deficit.

She said she expects a substantial part of the university upgrade would be funded through public private partnerships and other types of investment.

Bloomberg told the senate that Dr. Nigamanth Sidhar had been promoted from interim provost to provost.

“I've made the decision to appoint Nigamanth Sidhar as our permanent provost,”  Bloomberg said.

“I had had conversations with him about how much he loved CSU and I was so delighted that he accepted that role," she said. "I have the utmost respect for Nigamanth and the utmost trust in his judgement.”

Bloomberg told the senate she was convinced that Sridhar was the right person for the position, voiding the need for a search. Sridhar had been at the National Science Foundation since April 2020, before he agreed to return to CSU at the president's request, starting in May this year as interim provost.

“I am very confident in my decision," Bloomberg said. "And it does fall within the purview and the responsibility of the president to consult and name a provost. It is my responsibility to do this, which is why I consulted so extensively."

Provost Sidhar told the faculty senate that before his return to CSU he had received many emails regarding his new position, but one e-mail stood out.

“The one that was what I thought was most important was an e-mail that I got from Jeff Karem, the convener of the chairs’ council, that talked about the bugs and rats in the bathrooms in Rhodes Tower,” Sidhar said.

The provost added that he understood that his office is in charge of the work environment at the schools and that it is important to maintain it.

"If there are things that I should pay attention to that I am not, please let me know, "Sridhar said. "I'm here to listen. And I'll do the best I can to get the attention it deserves."

The next faculty senate meeting will be in the spring 2023 semester.