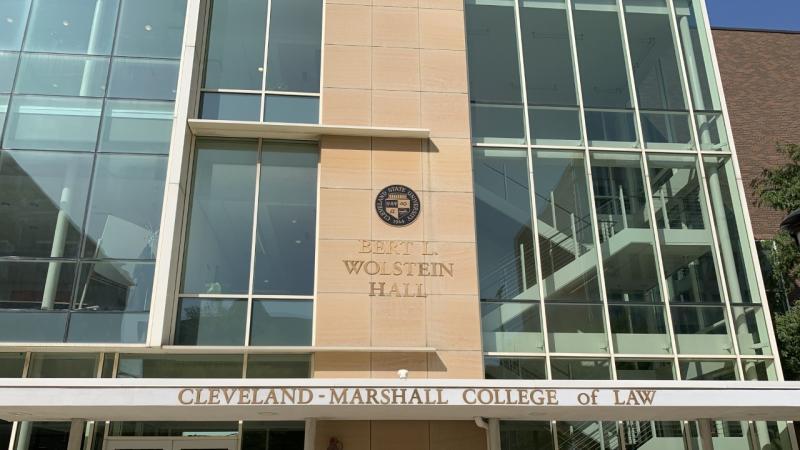 President Bloomberg has endorsed and forwarded to the trustees a report to Cleveland State University from an ad hoc committee formed to assess whether to drop the distinguished jurist and slave owner’s name from the Cleveland-Marshall College of Law.
By ABIGAIL PREISZIG - posted October 5, 2022.

Cleveland State University's President Laura Bloomberg has reported to the CSU Board of Trustees that she supports the move to drop Chief Justice John Marshall's name from the Cleveland-Marshall College of Law. Bloomberg was responding to the findings of an ad hoc committee set up to investigate the issue.

"Based on my consideration of all information provided and referenced in the report, the analysis of the ad hoc committee and the policy-related rationale outlined for their decision, I submit to you my acceptance of the recommendation to remove the name of John Marshall from CSU’s Cleveland-Marshall College of Law," Bloomberg wrote to the trustees on Sept. 2.

The board met on Thursday, Sept. 15 and said it would consider the recommendation to remove Marshall's name and vote on the issue at its November meeting.

John Marshall was the chief justice of the United States between 1801 and 1834 and a slave owner. Despite his distinguished career, the ad hoc committee agreed that his slave-related actions sullied his name. Law school Dean Lee Fisher on Thursday concurred, according to a report in Crain's Business.

"My position is, yes, we should no longer name our school after Chief Justice Marshall because despite his distinguished record as a jurist, which we should cherish and recognize and acknowledge forever," Fisher said. "We cannot truly believe in present-day values and reconcile that with the fact that he was actually, in many ways, an unrepentant slave owner."

Debate over the law school’s name began in 2020 with an online petition that called on CSU’s Cleveland-Marshall College of Law and the University of Illinois at Chicago's John Marshall Law School, now UIC School of Law, to remove “Marshall” from their names. In response, former CSU President Harlan Sands asked the leadership of the Law College to submit a report to the board of trustees.

An ad hoc committee composed of students, faculty, alumni and staff was created. It researched the issue, surveyed students and alumni and in December 2021 produced a report entitled the “Law School Name Framing Document.”  The document covers “Why We Should Keep our Name,” “Why We Should Change our Name,” “Some Alternative Naming Options” and “Why We Should Make this a Teachable Moment” in its more than 43 pages.

In a previous Stater interview, David Forte, law professor and member of the ad hoc who argued to keep the Marshall name, discussed the history of the law school name as a reason to keep the name. Forte explained that Cleveland Law School and The John Marshall School of Law merged during World War II.

Cleveland State University acknowledged the “thoughtful, careful process” of the ad hoc review and advisory committee and the time needed for the Academic Affairs and Student Success Committee and the full CSU Board of Trustees to review and consider the report.

“The Ad Hoc Review and Advisory Committee followed a thoughtful, careful process in doing its work," CSU said in a statement from the president's office. The statement said this included a thorough review and discussion of the comprehensive report compiled by the Law School Naming Committee, and the University’s Space, Unit, and Entity Naming Policy and its related procedures. Review of the work of the Law School Naming Committee also allowed for consideration of the views of the members of the law school, law school alumni, the broader university community and other stakeholders.

“The Academic Affairs and Student Success Committee and the full CSU Board of Trustees must now be granted that same opportunity to complete a careful review and consideration of the Ad Hoc Review and Advisory Committee’s report," the office of the president said. "We will continue to keep you updated on the review process," the statement added.

If the trustees vote to drop Chief Justice John Marshall's name from the Cleveland-Marshall College of Law, the next step is renaming. Possible alternatives discussed in the “Law School Name Framing Document” include Thurgood Marshall, Louis and/or Carl Stokes, Judge Ann Aldrich and simply, Cleveland State College of Law.