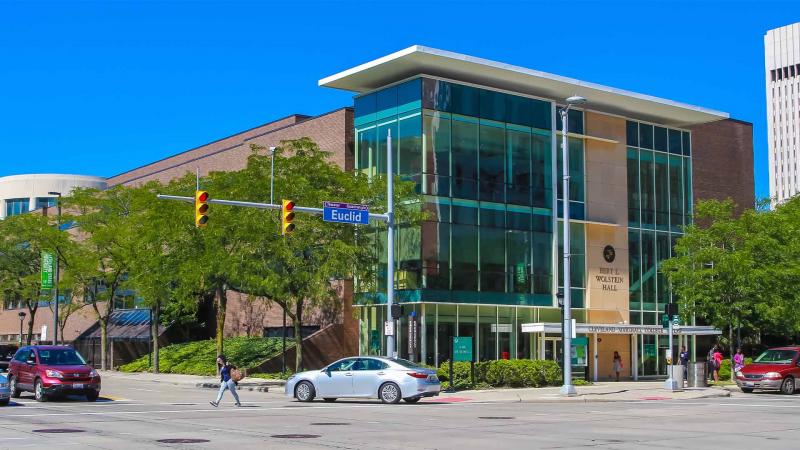 Supporters of the name say John Marshall should be honored for his role in creating judicial mechanisms that helped eliminate segregation.
By JADEN STAMBOLIA

The debate whether to change the name of Cleveland State University's Cleveland-Marshall College of Law has gone on for almost two years. The spotlight on the issue has grown with time, even drawing the attention of Cleveland's city council and popular progressive politician Nina Turner.

The debate is about John Marshall, the fourth chief justice of the U.S. Supreme Court. Marshall's time on the Supreme Court was notable for its successes, but opponents of the name say those successes are overshadowed by Marshall's legacy as a slave owner.

In July 2020, CSU President Harlan Sands tasked the leadership of the Law College to issue a report to the board of trustees. A committee was formed and a “Law School Name Framing Document” was created. In that document, Professor David Forte and Professor Stephen Lazarus co-authored the argument that the law college should keep its name.

“If we were going to have a new name, I would think that Marshall would be an excellent choice,” Forte said in an interview with The Stater. "But that's not the issue, because when the law school or institution already has a name, the burden of proof is on those who want to take the name away.”

History of the law college

In the early 1920s, Cleveland had two schools to study law, one was the prestigious Cleveland Law School, which was established in 1897. The John Marshall School of Law was relatively new to the scene, being established in 1916.

Forte explained that both laws schools were battling with which method of instruction to use. The Dwight Method was mostly lectures and problem solving, the other approach is the case method, in which students study cases and try to draw out the legal principles from the cases and decisions made about them.

The Cleveland Law school taught using the Dwight method. John Marshall School of Law was an advocate of the case method because the law school's founders had either themselves learned the case method or believed it was the best.

“It was interesting, they chose back in 1916 John Marshall because John Marshall was the preeminent name in American jurisprudence,” Forte said. “These men wanted a more national name because the case method seemed to be national and not parochial and local.”

To those founders, Marshall would be the perfect fit because his cases were the best cases to use as examples.

“They wanted a more national look to the law school. So they called it after John Marshall, and also you know John Marshall by his cases,” Forte said. “You couldn't get a better example of cases than John Marshall’s.”

“The Marshall brand stuck and for generations before 1946, and from 1946 up until today,” Forte said. “Seventy years of graduates of Cleveland Marshall say I went to Marshall.”

The complication of the man Marshall

Forte said he considers Marshall to be a hero of American Law. One of Marshall’s achievements was the establishment of judicial review for the United States.

Forte argues that without judicial review, cases like Brown v. Board of Education -- the 1954 landmark decision of the U.S. Supreme Court which banned racial segregation in public schools, opening the way to integration in a major victory for the civil rights movement -- would never happen.

While much of the discussion today is centered around Marshall owning slaves, Forte also contends that Marshall's legacy as a slave owner must be seen in the context of his efforts on the bench to free slaves.

“There was a case called Pleasants versus Pleasants in the 1790s when Marshall was an attorney. He took a number of slave cases we think pro bono,” Forte said. “He won and he was able to get slaves freed that were children of a slave father and an Indian mother.”

While Marshall was on the Supreme Court, he presided over multiple cases that emancipated over 400 slaves. He also presided over cases in which his decision led to people remaining in slavery.

“Paul Finkelman counts eight cases in which John Marshall came down in favor of the owner of the slave rather than the slave,” Forte said. “I started to look at those cases and the law, and some of them were just so clear. He (Marshall) actually had no choice, it seems to me.”

“Millions of people who were freed from segregation were freed from the judicial mechanisms that Marshall put in place,” Forte said. “So that's why I think his name should continue to be honored.”

What’s next for the name

303 of the responses (22% of the total) were from current law students. 39.6 percent of those students voted to keep the name, and 49.5 percent voted to change the name.

The naming committee recommended to the Board of Trustees that the name be changed.

“Changing the law school’s name would be a consequential decision,” the university said in mid-April in response to a protest by Students Against Marshall. “We continue to work through an inclusive process that considers the views of the members of our law school, our broader university community, and other stakeholders.”

The next Board of Trustees meeting is on May 19. If the trustees do not make a decision then, the board's next scheduled meeting is Sept. 15, during the new academic year. The Board of Trustees also has the power to call a special meeting to address the issue of whether to change the name.