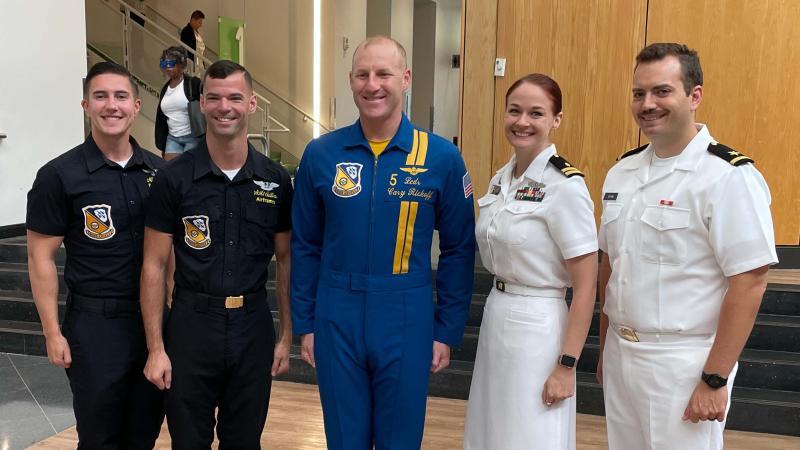 The event gave students the opportunity to learn from the service team and ask them questions about what they do.
By JACK GILLESPIE

Cleveland State University students had the opportunity to speak to members of the U.S. Navy Blue Angels ahead of the Cleveland National Air Show when the team visited CSU.

Brandon Thompson, Director of CSU's Veteran Student Success Program opened the event with a presentation which highlighted the services of the program then transitioned to a Blue Angels demonstration video.

After the video, Navy Lieutenant Commander Cary Rickoff addressed the attendees. Rickoff explained the history of the Blue Angels, what they do, and how to become one. 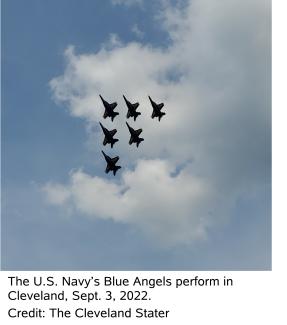 The Blue Angels are a Navy flight demonstration squadron. The Navy started the unit in 1946 to boost public moral, showcasing World War II planes across the country. Today, the squad continues to do about 60 shows a year to demonstrate the capabilities of U.S. naval aviation.

“76 years later, we are still flying,” Rickoff said. “And we are flying some much faster airplanes than we were back then.”

Due to the complexity of the performance, it is neccessary to have a strong level of trust between everyone on the team, both in the air and on the ground, Rickoff explained. This allows the squad to operate more efficiently.

“We turn what is normally a 15 to 20 minute process into about four minutes,” Rickoff said. “Our team is built on trust.”

In addition to trusting one another, the team has to remain sharp at their respective jobs. In order to do this, the flight routine sees a constant increase in difficulty in order to push the skills of the squad.

“We (increase difficulty) for a couple of reasons,” Rickoff said. “To make it look good and to keep fighting off that complacency.”

Rickoff added that it is a challenge to find the outer boundary of difficulty without crossing it, and attributes the Blue Angels long past as a means of determining how far to go.

Rickoff was also asked about something a little more personal, which was which city he liked flying in best. This question was met with a crowd-appeasing response.

“This is my first time in Cleveland,” Rickoff said. “So, I won’t vote for you guys yet, but it would probably be Cleveland.”

Among the students attending the presentation was Jawahir Muhammad, a junior in CSU's nursing program. Muhammad works for the Veteran Center and her father served in the military.

“My dad was in the army,” Muhammad said. “I don”t know too much about the Blue Angels, but I knew at this event I could learn more.”

The Blue Angels performed at the Burke Lakefront Airport over Labor Day weekend. The performance on Sunday was cut short due to inclement weather.