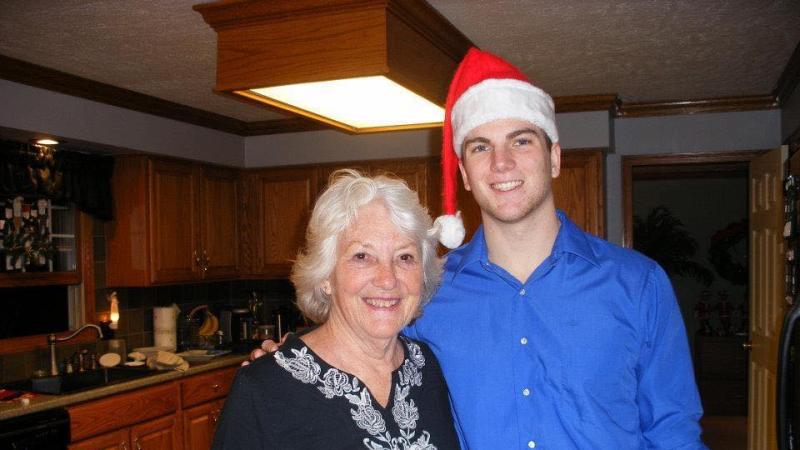 My aunt and I at our family Christmas party in 2011.

Never abandon people, even when they don't know who you are

I stopped at the gas station, not wanting to show up to see my auntie empty handed.  It was a spur of the moment visit, as I was coming off a near emotional breakdown. I was coming off the biggest mistake of my life at the time, one I was sure would haunt me forever. I needed a friendly voice.

A few years into her battle with dementia, I knew her mind was more than partially gone by the things my family had told me, but it would still be her voice, and that was enough. I grabbed a pack of Reese’s Peanut Butter Cups, as peanut butter on my dad’s side of the family was the food version of gold, and continued the drive to the facility she was cooped up in.

A little backstory: To say my Auntie Glenda was nonjudgmental would be an understatement. If I screwed up in school and got detention, my parents’ first question would have been, and rightfully so, “Well what did you do to deserve that? You probably had it coming.”

My aunt, on the other hand, was the type of person that would help you cover up a murder. She would have marched her way down to the school and demanded to speak to the principal. Yeah, she was that relative. I played football briefly (and embarrassingly) in eighth grade, and one day she dropped me off at practice. Before I got out of her car, she made me memorize her phone number (216-496-9424), just in case I needed her to come down there and give my coach a piece of her mind. She always had your back; it didn’t matter if you were wrong.

When I made my way inside the facility on that day in 2015, I truly had no idea what to expect, but I knew it wouldn’t be good. I walked in her room, our eyes met and to my relief, I saw recognition in them. She knew who I was. Maybe she didn’t know my name, or where I lived, but she knew me.

I breathed a big sigh of relief and eagerly gave her my last-second gift of peanut butter cups, which she placed in her purse. We talked for a few minutes, about her roommate, about the food, about how she had to escape, but most notably, about her grandson Cade. She was still in awe about how years ago, when Cade was probably 7 years old, he could wrap his arms around her and lift her off the ground. It was her favorite story, one that I’d heard dozens of times, but her face always lit up when she told it, followed by her trademark, hearty laugh. Then, she reached inside her purse, “discovered” the peanut butter cups, and offered me one. That’s when it all hit me.

I’ve never seen a grizzly bear in person, but I know what they look like. I know when they stand up, they’re taller than people. I know they weigh more than 500 pounds. I know their fur is brown and their teeth are sharp. I’ve seen them depicted on Animal Planet and have read about them in books and magazines, but I’m imagining if I saw one in person, right next to my face, it would totally shock me. It’s one thing to know what it is, but it’s another thing to come face-to-face with it.

Before that day, if you’d asked me what Alzheimer’s was, I could’ve told you. I’d seen it depicted on television; I’d read about it enough; of course, I knew what it was. Who doesn’t? But in that moment, when it stared me in the face, I was not prepared. I sat there, staring at her offering me the peanut butter cups and politely declined, and tried to shake it from my memory. But just minutes later, it happened again. And again. And again. I don’t know how many times, but each time it was harder to shake off than the last.

My aunt was a force. She was the backbone that held our family together. Every Christmas, dozens of us would flock to her house for dinner, where she always had stacks of filet mignon and numerous sides. She had to have spent thousands of dollars on just the food alone, and every single person who went received a gift.

When it came time for the gifts, everybody had their few people that they would exchange with, but every single person got my aunt something. No matter if it cost $200, or it was a sculpture made of Popsicle sticks, she opened each one with genuine joy and her larger-than-life smile. She didn’t care about money, she didn’t care about the mess it made, and she didn’t care if somebody left an unfinished plate in the middle of the living room table. It sounds like a cliché, but she was always happy-go-lucky, and instantly energized every room that she walked in. Some people just have “it.”

So seeing her such a shell of herself on that day, to the point where she was actively trying to plot her escape, was instantly a moment that, at the time, I knew I’d remember for the rest of my life. It was also the last time I saw her. She passed away from complications of the disease at the age of 76 on April 27.

My ex-girlfriend, Kelsey, had a grandma that battled the disease. Kelsey would frequently call and visit, despite the fact that her grandma would likely not remember those interactions. I asked her why one day. Why bother if she’s just going to forget? “I could never abandon my nana,” she replied.

I hadn’t seen my aunt since 2015, which is something I’ll have to live with. She would have never remembered my visits, but I’ll never forget that I didn’t.