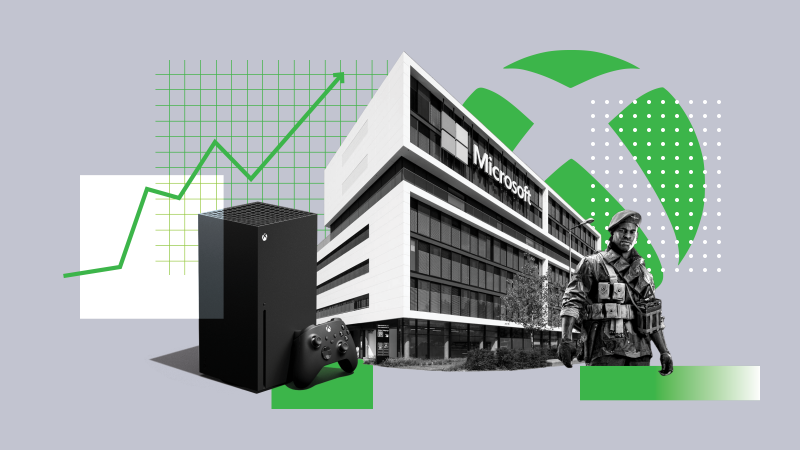 Eric Seitz
Microsoft’s Activision deal will likely be the biggest gaming story to come from 2022.

Microsoft’s acquisition of Activision Blizzard is good for present gamers, but might not be for future gamers.

In a world built on competitive capitalism, corporations sure do seem intent on eliminating all competition.
By ERIC SEITZ

The cornerstone of capitalism is competition. For a capitalist economy to function effectively, consumers must have the chance to choose what to spend their money on. Capitalistic competition surrounds us — it presents itself as the two rival lemonade stands on the cul-de-sac vying for the business of their neighbor, and, in the case of Microsoft's acquisition of Activision Blizzard, it presents itself as two media conglomerates — Microsoft and Sony — at each other’s throats battling for the hearts of gamers.

Microsoft broke the internet (or at least, the gaming side of the internet) on Jan. 18, with news of its $68.7 billion acquisition of gaming publisher and developer Activision Blizzard, and when I saw a couple weeks later that Sony acquired developer Bungie for $3.6 billion, I did a mental fist-pump — not because I’m a Sony fanboy, but because I found myself subconsciously rooting on the side of competition.

While Microsoft’s behemoth acquisition doesn’t automatically give it the lead against Sony, the deal is undeniably a huge win. And were Sony to have remained quiet following that announcement, they would have risked falling behind.

Corporate acquisitions have their upsides, of course. For one, the next Call of Duty will likely be free for Xbox Game Pass subscribers, a service that many already pay for in addition to purchasing the new Call of Duty every year. Further, Sony and Xbox each have well established game development and publishing infrastructures, so developers like Bungie can receive the support they need to make the content they want to make.

With the possibility of paying less for higher quality games that release more frequently, the near future for gamers looks bright. But what about further along the line?

In theory, Sony and Microsoft could continue duking it out in perpetuity, and their competition with one another will continue to breed that innovation that gamers have enjoyed for so long. But what if something were to happen? As the two companies rise higher and higher, the potential for fallout if one were to collapse only grows.

Microsoft’s nearly $70 billion acquisition isn’t worrisome at the moment because Sony is around to keep them in check. But if Sony hadn’t been in the picture, discourse about the deal within the console world would have sounded very different.

Publishers purchasing developers and other publishers is not new. New developers continue to rise and replace the old ones that have been acquired. While $68.7 billion is more dollars than my brain can fathom, Microsoft didn’t single-handedly end the console wars with that deal. Tomorrow, gamers will still be playing games on their Xboxes, PlayStations, and Switches. It’s what comes after tomorrow that is worrisome.