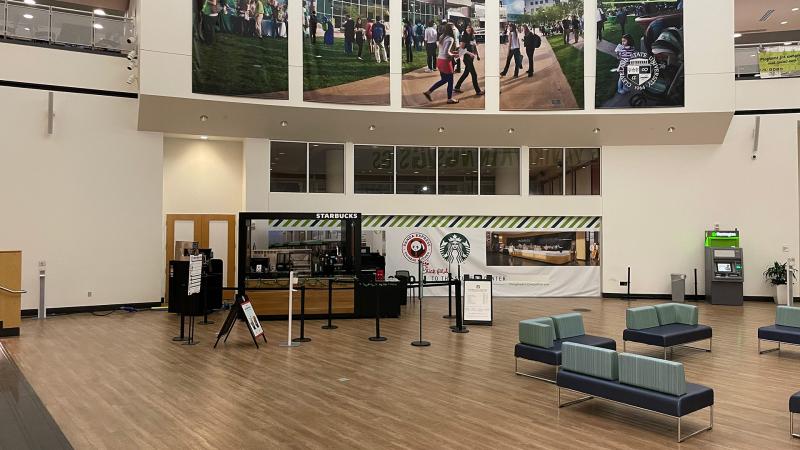 Credit: Jack Gillespie
The space where Chili's was located in the Student Center at Cleveland State University, Dec. 20, 2022.

One factor contributing to the setbacks was the university’s desire to receive feedback from the students. The hope in doing this was that the dining options on campus would better represent the campus community.
By JACK GILLESPIE - posted December 21, 2022
Audio file

The opening of the new restaurants planned for Cleveland State University’s will be delayed until at least the spring 2023 semester.

CSU’s Associate Vice President of Auxiliary Services Nicholas Vande Velde said the restaurants are on the way but will take a little longer than expected to open their doors.

“We're just saying now, as soon as you can open, we'll open them,” Vande Velde said. “We are looking at the spring semester for those locations.”

The delay comes after the administration announced in May a ten-year partnership with Aramark Higher Education to provide dining services on campus with enhanced menu and catering options, renovated dining areas and the introduction of national brands.

“We are excited to be starting the partnership with Aramark and transforming our dining experience on campus,” David Jewell, CSU's chief financial officer, said at the time.

However, it has now been over a year since Chili’s left the Student Center and its former space is still closed.

Vande Velde said that part of the delay in getting in the new restaurants was deciding which ones to consider, and for that key was getting student feedback on what they wanted.

“When we did some surveys, Chili’s didn't necessarily speak of students the way other brands did," Vande Velde said, explaining its departure. "Our goal is to really evolve the experience for the students.”

“The student surveys helped us identify what food locations to place,” Vande Velde said. “Then, we set out to find partners to our relationship with Aramark that would best fit the students needs.”

He added that typical construction delays also pushed back the opening of the new venues.

“I think the other thing that has slowed us is just genuine delays in construction,” Valde Velde said. “We don't have control over certain things here.”

One of the outlets could prove controversial as the Cleveland State administration is standing by its decision to bring Chick-fil-A to campus despite some student opposition to the politics of its owner.

Other students focused on the range of choices and how that could best serve the community.

“Of the new restaurants, the only ones I personally like are Chick-fil-A and maybe Barrio,” sophomore Vinne West said. “But, I am not opposed to the other options because it does diversify options on campus.”

“If the main reason the delay in opening the restaurants is because of waiting to see student feedback, then I can agree with that decision,” West added. “I think it is smart to wait until they know what the students want rather than spend money on something that will underperform.”

However, West also said the administration needs to make a decision soon.

“I would like to see restaurants being added for spring,” West said. “I do not want to have constant delays because a decision can’t be made to please all students.”

For updates on operations of CSU's dining department, visit its homepage.