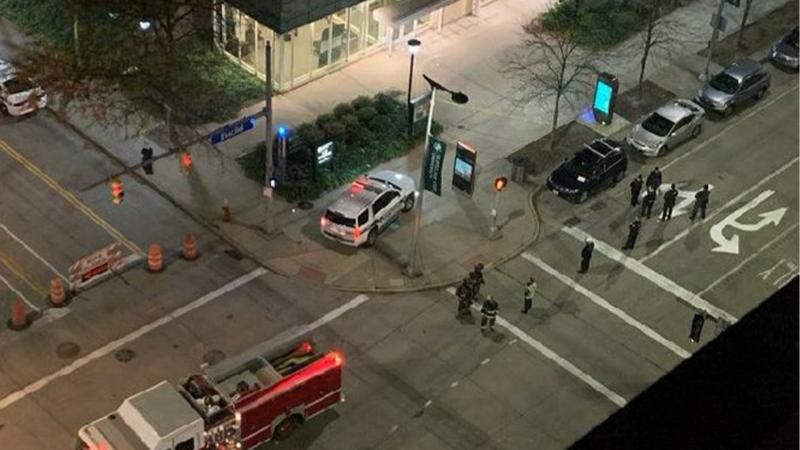 Credit: Jaden Stambolia
Emergency personnel outside Cleveland-Marshall College of Law on Thursday, Nov. 4 after they evacuated the law school and law library following a report of a bomb threat.

Other universities targeted across the country in a spate of false bomb threats included two other Ohio colleges, Ohio University and Miami (Ohio) University.
By JADEN STAMBOLIA

The police and university evacuated CSU's Cleveland-Marshall College of Law and law library on Thursday, Nov. 4 around 7:15 p.m. after a bomb threat was made.

First responders, emergency personnel and bomb detection K-9 units were dispatched to the scene. Police declared both buildings safe three hours later after an extensive search did not turn up any explosive devices or dangerous materials.

The threat against Cleveland State came as other universities across the state and country also had bomb threats called in. Over the weekend, two other Ohio colleges, Ohio University and Miami (Ohio) University received threats.

“Last week’s bomb threat involving the CSU Cleveland-Marshall College of Law building remains under investigation,” Anthony Traska, CSU Chief of Police, said on Tuesday, Nov. 9. He did not rule out that the threats were in some way related.

“We are working with local, federal and other university law enforcement agencies to determine if there is a connection with threats at other universities in the state and country,” Traska said.

Making a false bomb threat in Ohio is a second-degree felony which could result in penalties and possible jail time.

CSU alerted students of the situation as it unfolded Thursday evening through the university's text alert system. CSU Police encourages everyone to update their CampusNet settings to receive emergency notifications.

“The safety of our students, faculty and staff is our number one priority,” Traska said. “We encourage everyone to update their emergency contact information in CampusNet under CSU Alert to receive timely, emergency notifications.”