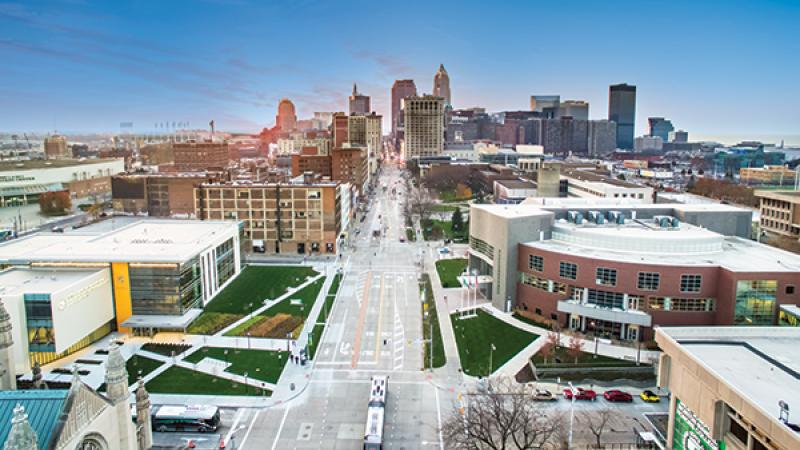 CSU Senate gets innovation update, more on COVID-19 and news from the SGA

COVID-19 and the Cleveland Innovation District headlined the Cleveland State University administration's report to the Faculty Senate at its meeting on Feb. 3.

Dr. Forrest Faison, CSU senior vice president and research and innovation
chief, updated the Senate on the battle against COVID-19 on campus and within the college community, opening with some good news.

“Today for the first time since fall we have zero people in quarantine living in the residence halls,” Faison said.

Faison outlined further steps the administration was taking to keep Cleveland State University as safe as possible from the pandemic.

Asked what progress was being made on getting faculty vaccinated, President Harlan Sands made a verbal commitment to try to hasten the process.

“I will weigh in with the Governor on this situation,” Sands said if that's what the faculty want.

Sands also reported that the Cares Act is opening up again for students to get financial aid from CSU for COVID-19 pandemic relief. The president said he is committing the administration to a five-day turnaround in responding to any student who submits an aid request.

On the Cleveland Innovation District, Sands reported on the university's collaboration with Jobs Ohio in a partnership with three local healthcare systems and Case Western Reserve University.

“We are the talent pipeline partner in this partnership between the three healthcare systems and Case Western.” Sands said. “The pipeline will make graduates that will meet the workforce needs of Cleveland.”

Sands said he expected CSU to garner a good chunk of the $110 million dollars budgeted by Jobs Ohio for the project which will help fund 19 career pathways at Cleveland State.

In other news from the Senate, Student Government Association President Renee Betterson reported on a new partnership between the SGA and CSU Foundation for an SGA cohort to work with the foundation in outreach and alumni programs.

SGA will also be having an Arbor day tree planting project run by the new SGA Sustainability Committee. This will include a plaque dedicated to the class of 2020 for their inspiration given the pandemic and, in Betterson's words, "their resilience in graduating in such a difficult and crazy time for all of us."

Dr. William Bowen with the Budget and Finance Committee reported that CSU’s finances are overall in good shape. He said that Moody’s Investor Service had given CSU an A+ rating which means that CSU bonds are high quality, putting the school in a good spot.

Bowen also provided context for the shift in how CSU is financed.

“A considerable majority of the money that is used to run CSU comes from tuition and fees paid by the students and the state subsidy," Bowen said. But he noted that in the mid-1990s CSU's cost of educating each student was split about 50/50 between the state and tuition. Now, over the years the state subsidy's share has fallen by half to about 26% of the total.

Bowen said that a large part of that reduction in the state subsidy reflected a sense in Columbus among policy makers that by the late 1990s, "higher education was no longer considered to be as much of a public good as it had been previously."

Perhaps the state government's renewed interest in education shown in the Cleveland Innovation District is the beginning of a change in that attitude.