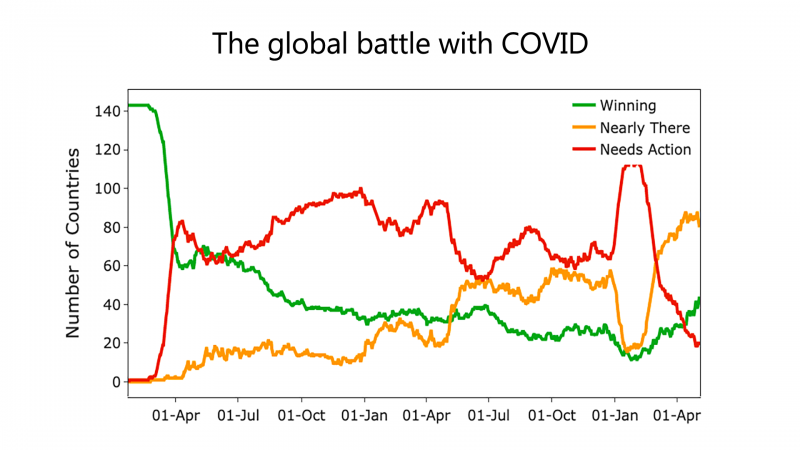 Credit: Kaylee Catalano | endcoronavirus.org
Although the number of countries beating COVID is on the rise, most countries still have a lot of work to do.

1M dead in the U.S. So, how is the world faring with COVID?

COVID has killed 1,000,000 people in the U.S. But the pandemic is global. So, what is the bigger picture?
By KAYLEE CATALANO

How is the world faring two years into the pandemic?

Coronavirus was first recognized in December 2019 in Wuhan, China. Although the origins of the virus are still unclear, its rapid spread soon triggered fears of a global pandemic.

Before the new virus was discovered as the cause of illness, the World Health Organization (WHO) announced a sudden cluster of pneumonia patients in Wuhan with no reported deaths.

Within 24 hours of this announcement the new virus was detected.

On January 12, 2020, the genetic sequence and any known information at the time of the virus was shared with the public.

A little over a week after the WHO announced the sudden “pneumonia” outbreak that was soon identified as COVID-19, the first case of the virus outside of China was reported in Thailand.

January 30, 2020, the WHO's Emergency Committee (EC) reached consensus and advised the Director-General that the outbreak constituted a Public Health Emergency of International Concern (PHEIC).

Between December 2019 and March 2020, the virus had spread at such a severe and alarming rate outside of China that WHO declared COVID-19 was a pandemic.

The long-haul battle against the virus then began.

From public shutdowns, mask mandates, social distancing and the fight for an effective vaccine, the world's population has been battling the pandemic every way they can ever since.

So, how is the world faring now roughly two years into living with coronavirus?

According to the May 5, 2022 update of the COVID-19 dashboard run by the Center for Systems Science and Engineering (CSSE) at Johns Hopkins University (JHU), 515,871,259 cases of COVID-19 have been reported worldwide so far.

6,246,577 deaths were reported globally as of May 5, 2022. The U.S. has most deaths, at close to 1 million. Other countries, many of which worked far harder than the U.S. to contain the virus, have also suffered.

Germany is the country with the highest numbers in JHU's latest dashboard update, with 2,864,349 total cases and 5,089 deaths reported in a 28-day period.

However, Germany is among a few of the bigger European countries faring poorly these days.

These countries are not the only ones seeing vast changes in their numbers though.

Other countries such as Australia, Barbados, Japan, China, Finland, and Thailand are among those faring poorly. Together, these countries are seeing hundreds and thousands of new cases every day.

Is it all bad news?

The United States, Brazil, Spain, Russia, Austria and Belgium are some of many countries displaying progress in their climb out of the pandemic. They are considered to be faring moderately.

Belgium reported the lowest numbers among these countries listed, with 189,756 cases and 586 deaths over the last 28 days.

Meanwhile, some countries appear to be faring exceptionally well in combating the pandemic, although it's not clear whether their low numbers are the result of vigilance or inadequate data.

Armenia, Afghanistan, Pakistan, Somalia and Ukraine are among a handful of countries reporting relatively low numbers in cases/deaths of COVID-19 in recent weeks.

Pakistan reported 1,863 cases and eight deaths over the last 28 days.

Afghanistan reported a case count of 927 and death count of 12 over a 28 day period.

Armenia reported 267 cases and three deaths over the last 28 days  – much lower numbers than some of the other countries considered to be faring well.

Ukraine has the lowest numbers of these examples, with zero cases and zero deaths reported over the last 28 days. Presumably Russia's invasion Feb. 24 has affected Ukraine's ability to track COVID.

The struggle is far from over, including in the U.S.

Each country, state and city may be handling the pandemic differently, but the collective effort is evident in the data over time.

However, that same data shows the battle to eradicate the virus is far from over.

According to The New York Times, reports of new coronavirus cases have doubled in the U.S. in the past month as Omicron subvariants have spread across the country.

The Times goes on to report that cases are increasing in all but four states and territories, and in more than a dozen states or territories, the daily case average is twice as high now as it was two weeks ago.

Despite this rapid growth, the virus's true spread is believed to be even greater, since many infections go uncounted in official case reports, The Times reports.

Although progress can be seen across the globe, it's safe to say that the world is faring averagely, if not slightly above average.

The recent surge so far appears milder than the waves that preceded it. Cases remain well below the levels seen during the Delta and Omicron surges late last year, and fewer coronavirus patients are in intensive care today than at any point since the pandemic's earliest days, according to The New York Times.

With new variants evolving and spreading, the world must continue to push to slow transmission rates and work towards finding a cure for this disease stalking our planet.