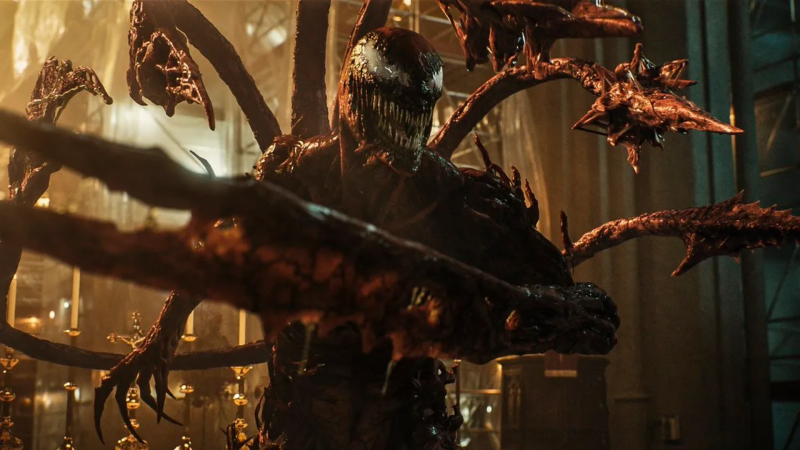 Credit: Sony Pictures
Carnage lets out a primal shriek before engaging in battle with the film's hero, Venom.

Review: Venom lacks the necessary carnage to be memorable

Venom: Let There Be Carnage is more of the same in some ways, but falls short in its delivery of the carnage promised within its own title leaving the audience wanting more.
By MATT THOMAS

Carnage is lacking in the sequel to the 2018 box office hit comic book film “Venom.” But to some that may not mean much as “Venom: Let There Be Carnage” hits the mark for why we are there, the Eddie/Venom dynamic.

It may be a slightly more entertaining film than its predecessor, but “Venom: Let There Be Carnage,” isn't without issues. The film still moves at a breakneck speed, and you are able to enjoy it more as the film swerves, bordering at times on out of control. Over the top is one way to describe this sequel to a film that was not heading there anyway.

Eddie Brock (Tom Hardy) and his parasite life partner Venom (Hardy) are at odds in this film. Some time has passed since the first film, but they’re being investigated by the FBI for the events that occur in the first film.

On top of that Brock has hit rock bottom with work, now at the Daily Bugle. However, the pairing of Brock and Venom is in need of some serious couple's therapy. How should they go about living their shared life?

The struggle between the pair only grows when the San Francisco Police Department needs Brock’s help with deciphering the mind of serial killer Cletus Kasady (Woody Harrelson) who seems to have an attachment to Brock as he is the only person he will talk to.

With the help of Carnage, Kasady breaks out and looks to reunite with his long-lost love while seeking revenge on Brock. Now Brock and Venom must figure out their differences quickly with their life on the line.

There are some major issues with the film, one major one being the runtime. The film clocks in at just over an hour-and-a-half. The breakneck pace gives the audience no time to breathe nor allows for characters apart from Brock and Venom to develop.

When introducing a character such as Carnage and how important he is to the Venom mythos, it’s important to give Carnage and Kasady the necessary screentime to show off their foil to our main character.

The result is that a film which is subtitled Let There Be Carnage is lacking not just the character Carnage but the necessary violence and action that goes along with the character. What's the point of the name otherwise?

While Carnage has its moments of excitement, they aren’t all that memorable because they are seen all throughout the marketing campaign as well. They’ve all been seen, so why should the audience care.

Another issue is that Harrelson is hamming it up in the entire film to the point where it feels like he is in the 1990s animated Spider-Man show and not a live-action Venom film. It can be distracting.

Overall though, Hardy is able to keep you invested and interested as he did in the first film. The dual role he has to play as Brock and Venom works well and you can tell he loves doing it. That dynamic is what makes the film work as much as it does, and if that dynamic doesn’t work, the film as a whole doesn’t work.

“Venom: Let There Be Carnage” is directed by Andy Serkis and stars Tom Hardy, Woody Harrelson, Naomi Harris and Michelle Williams. Currently, it's only available in theaters.