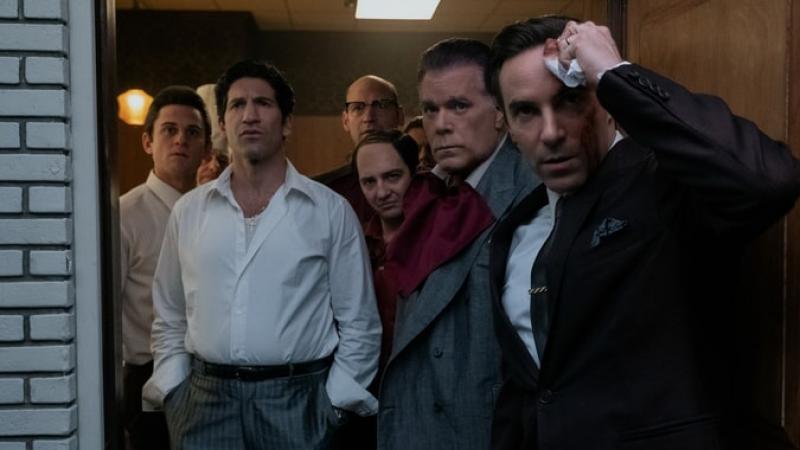 Credit: Warner Brothers Pictures
The Moltisanti’s (Nivola & Liotta), the Sopranos (Bernthal & Stoll) along with their crew (Magnussen & Magaro) as lookout at the destruction being done during the 1967 Newark Uprising.

Review: Many Saints scores but does not deliver Tony Soprano

The film lacks exploration into why we are all there, Tony Soprano, but that seems to have been a decision the marketing department made. Instead is an insight into the man behind the mobster.
By MATT THOMAS

After leaving our television screens roughly 14 years ago, the mobster family the Sopranos made their return with a big-screen prequel “The Many Saints of Newark.” It comes with a slight catch.

The audience is not following the story of the young Tony Soprano, instead we follow his nephew Christopher’s father Richard “Dickie” Moltisanti played by a show-stealing Alessandro Nivola. The film follows how he and his decisions set in motion the events we see in the future on the small screen and how they, in turn, affect Tony.

Yes, the young Tony Soprano is still in the film but in a more muted fashion. The late great James Gandolfini’s son Michael Gandolfini does a superb job of stepping into his father’s shoes playing the younger version of the iconic character.

The issue has more so to do with the lack of true character exploration we get of Tony as he transitions from being this bright-eyed teen who dreams of playing college football to the feared killer audiences know and love. It feels as if we need another film just to truly bring his story to a close.

In a somewhat jarring move, the film’s marketing campaign implied that the focus would be a Tony-centric story when in reality it’s Dickie’s story and his effect on Tony. Otherwise, the story is very solid.

The film plays like a two-hour Soprano episode, something some may consider a detriment while others a plus. It keeps you engaged and the similarities are there. When Dickie seeks out advice or someone to talk to, he speaks to his incarcerated uncle similar to how Tony would talk to his therapist.

Without getting into too many details to avoid spoilers, the film does a good job of balancing the drama of the times with the mobster aspects. This is seen heavily when Dickie and his crew go to war with Harold McBrayer’s crew (Leslie Odom Jr.) in a battle for control in New Jersey.

Other standouts include Ray Liotta as Dick “Hollywood” Moltisanti, Vera Farmiga who channels a spot on Livia Soprano that would make the late Nancy Marchand proud, among a well-rounded ensemble that does a commendable job making sure they are making the established characters their own.

Written by Sopranos creator David Chase along with Lawrence Konner and directed by Alan Taylor, The Many Saints of Newark is now available on HBO Max and in theaters.