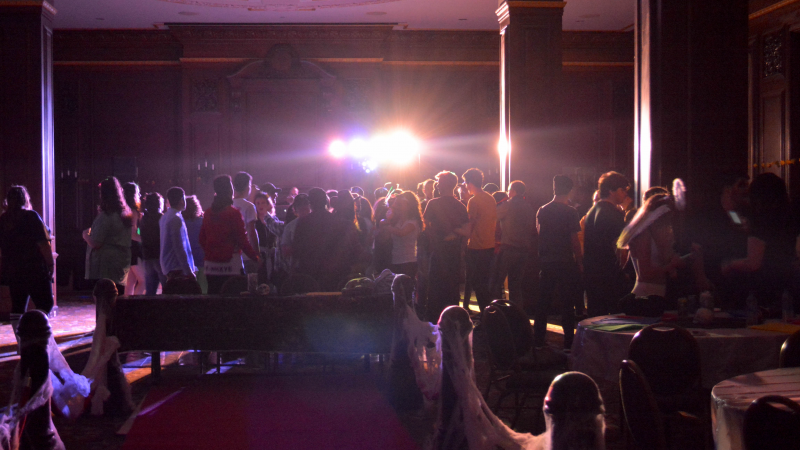 Credit: Alexandra Ruggieri
Students dance in a haunted version of the Fenn Tower Ballroom at 2018’s Fenn Tower of Terror.

How the non-academic side of school (especially the Campus Activities Board) took me from hating college to loving it — so much that I decided to stay a whole extra year.
By ERIC SEITZ

That’s what I repeated to myself as I quietly trudged through my freshman year at Cleveland State. Still, I found myself reminiscing about my high school years — the times I genuinely enjoyed heading to school each day.

When I started college, I knew everything (or I thought I did). I knew that I wouldn’t be interested in extracurriculars, that my professors didn’t care about my academic well-being — I even knew my way around campus from day one, with two older sisters that attended CSU.

My ignorant omniscience was the reason that I nearly made it through two years at CSU before looking outside my class schedule for any sort of activity to dig my time into. Despite the fact that I was simply joining for the resume-booster, I applied to be on the Campus Activities Board (which has ironically become the biggest time commitment in my life).

Now in my senior year, I look back at freshman me and wonder how I could’ve survived that year — let alone four years — by just sticking to my course schedule and heading home immediately after class ended.

What I had failed to understand when I started at CSU was that four years — or however long college might take — is an eternity, especially when my mindset was that I just needed to endure the suffering.

Despite the genuine interest I had in the courses I was taking, my college experience felt empty. I would drive to school, attend my two classes for the day and drive home. Most days, I wouldn’t even utter a word while on campus.

The Campus Activities Board swept me up in their eat-sleep-breathe-event-planning way of life, and while I felt the temptation to resist CAB’s borderline-culty, all-or-nothing initiation process, I gave in to its members’ motivation to make college fun — fun for not just those in CAB, but the entire student body.

My college life as a CAB member looked drastically different from my life as a plain old student. Instead of driving to campus for a class and leaving, I was walking to class from working in the CAB office, and then I was heading back to the Student Center to help work a CAB event in the Atrium. My college existence had finally gained substance beyond merely fulfilling my degree requirements.

Getting involved with CAB had more of an impact than simply helping me not hate my life (although that was a big one). After seeing firsthand the non-academic opportunities the university offered, I joined other student organizations like The Vindicator, eventually becoming its editor-in-chief, something I could never have imagined when I arrived on campus. Additionally, my role in CAB led to internship opportunities with University Marketing and the Office of the Provost.

CAB has provided me with so many career-relevant outlets that I’ve found myself having to turn some down. On the most basic level, CAB helped me make friends, giving my days positive interactions that I wouldn’t have had otherwise.

Classes are hard and time-consuming as it is, and everyone has outside commitments that prevent them from getting involved on campus. However, universities are built to be more than mere information husks from which students lifelessly glean knowledge. CSU, like all universities, offers social, emotional and networking opportunities for students, and to ignore them would be wasting the general fee that everyone pays at the beginning of the semester.

Yes, it’s only four years. But those four years are only what you make them.