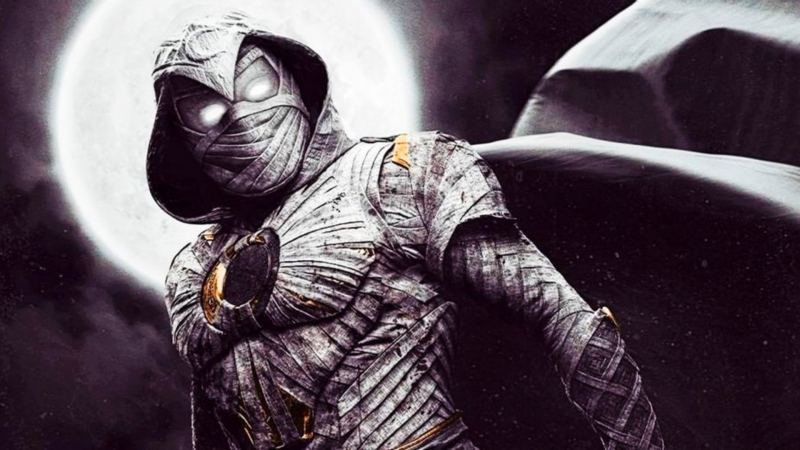 Credit: Disney & Marvel Studios
Moon Knight as he overlooks and passes judgment on the wrongdoers in his sights.

Oscar Issac provides one of his most nuanced performances in Marvel’s Moon Knight which released on Disney Plus March 30.
By MATT THOMAS

When vengeance is served in comic book films and television most people immediately jump to Batman. Moon Knight, a product of Disney and Marvel, is the latest attempt to break that pattern.

Oscar Isaac makes his debut in the Marvel Comic Universe as he tackles the titular role of Moon Knight who unlike most comic book characters has multiple secret identities, Marc Spector and Steven Grant. Both are the same person, but they suffer from dissociative identity disorder. Each summons the powers of Moon Knight in different ways.

With Marc, you get a mummified Batman-esque version of Moon Knight who takes on criminals and wrongdoers in a more violent fashion, while with Steven you get Mr. Knight who is a more posh and proper character that is more brain than brawn.

Gifted their powers by the Egyptian God of the Moon, Khonshu, the two must learn how to co-exist to stop Arthur Harrow (Ethan Hawke) who is attempting to resurrect Ammit, an Egyptian God also known as “The Devourer of the Dead." Harrow himself has been given the ability to take life from others based on the powers Ammit has bestowed onto him.

Moon Knight isn’t the first Marvel Disney Plus show as it follows the releases of Wandavision, The Falcon and The Winter Soldier, Loki, What If, and Hawkeye which were all released in 2021. However, unlike its predecessors, Moon Knight is the first show that serves as a character's origin story.

The way Jeremy Slater and the team in the writers’ room chose to tell this story was absolutely incredible and interesting. The first two episodes choose to cut away and jump whenever an identity switch occurs between Steven and Marc. This allows for major jumps in not only time but across the map.

It leaves you wondering as an audience member what might have occurred in that time and what consequences may come from whatever those actions were. The way it is cut is interesting and engaging to the point that when it first happens, you’re trying to figure out what exactly just happened.

Isaac has a tough task, working with different identities and, at times, acting against himself. Overall, he does a superb job at differentiating between each character. Playing against yourself is never an easy task for an actor but Isaac can do it in a way that isn’t cheesy but engaging, it shows what a fantastic job he’s done.

The supporting cast is superb as well, Hawke’s Harrow is creepy and sinister. There are actions he does and commits to that play on screen as extremely disturbing but exhilarating at the same time. May Calamawy plays Layla the romantic interest of Marc/Steven and steals numerous scenes whether it be with the acting or action.

The mystery behind the story remains the most interesting part, and when we get to episode 4 that is when the story rips into full throttle and completely makes the audience question everything they have learned up to that point.

One can only hope that the final two episodes meet the heights that the first four sets before them or the finale is destined to fizzle out as  the other Disney Plus shows before it.

Moon Knight released on Disney Plus on March 30 and stars Oscar Issac, Ethan Hawke and May Calamawy.