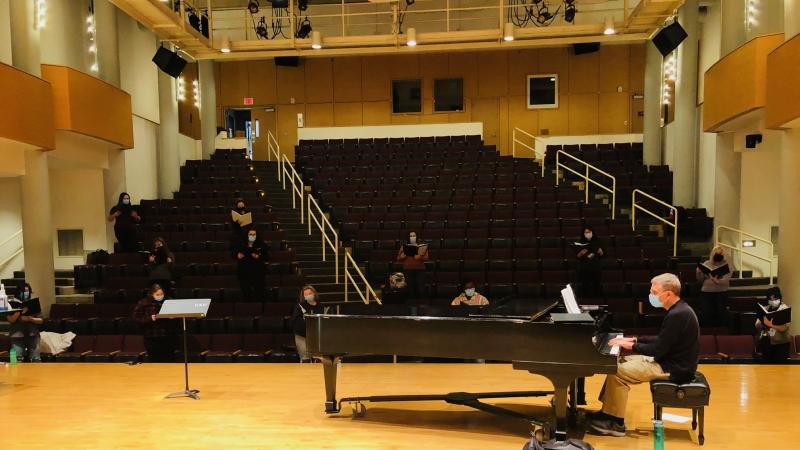 COVID-19 has made in-person music classes at Cleveland State University change their entire format to cater to social distancing and safety guidelines.

The Cleveland State University School of Music is one of the main schools that had to keep a majority of in-person classes since music lessons can’t be done effectively through Zoom or remote courses.

The choir specifically has made many changes including their practice space, how they sing and the six foot social distancing requirement. 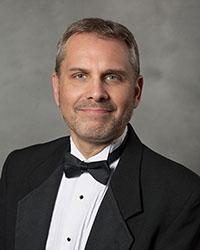 Brian Bailey received a doctorate in musical arts from the University of Iowa where he conducted several programs. He has been a vocal instructor at CSU for 12 years and is currently the director of choirs for the school of music.

Bailey said the choir section has undergone lots of changes, but are stoic about the challenges.

“This is definitely not anything that I want to stick with,” Bailey said. “I think the students will say the same thing that they want to be able to normally sing again.”

The choir sections used to be in a dedicated rehearsal space where they would have all their classes, but it can no longer be used due to the fact that it is not built for social distancing rules.

The rehearsal room has good acoustics to where the student singers can hear each other well and has chairs that can be set up for sectioned groups to work on their vocal pieces.

“There is a lot of flexibility with that choir room and we took a hit not being able to rehearse there anymore,” Bailey said.

According to Bailey, research has shown that singing spreads any contagion more rapidly than talking, so the choir needed to find a space that can adhere to social distancing rules. The singers now need to be wearing masks at all times in rehearsal and be roughly 10 feet apart.

They have to think about the air circulation as well, and require a larger space so the contaminated air will not stick around as long.

“The air in buildings stays there from people breathing and doesn’t spread out, because of this we have to change locations mid class every 30 minutes,” Bailey said.

CSU’s choir is now having their classes in the performance spaces like Draco Hall, but the students can’t all fit on the stages. Some have to sit in the seats and turn it into a circle spread out around the room.

The space they’ve used the most has been the Wolstein Center because it is very large and gives students space to spread out and hear each other well. Additionally, because of its size, they can just relocate to the other side of the building instead of changing classrooms every 30 minutes.

“We also did some singing outside which is always fun and is refreshing for the students as well,” Bailey said.

Lauren Greer is a music education major in her second year. One of the hardest challenges for her has been doing voice lessons remotely instead of in person.

“Since our times in the room are limited, I have to do my lessons over Facetime,” Greer said. “I can’t even hear the piano through it, so it makes it very hard to effectively do them.”

With masks and social distancing, it has made it harder for the students to hear each other and keep track of which areas of the choir need work.

“Our dynamics have to be a little lower and has made it harder for us to work together from that,” Greer said.

According to Greer, the one good thing to come out of this is that teachers have been more understanding of students that are struggling to adjust to the changes and have been more helpful than ever.

“Since I commute it has been nice that professors are more lenient with attendance since we have to juggle remote and in person classes,” Greer said. “They have also just been more helpful and attentive to make sure students are being successful in this new format.”

When CSU shut down in March, Bailey describes there was a sad aura surrounding the school of music and it was hard to find ways to overcome the challenges. He said he is happy he gets to still instruct and have classes with his students.

“I just keep thinking at least we can sing and have a shred of normal activities that students and myself can come back to.”