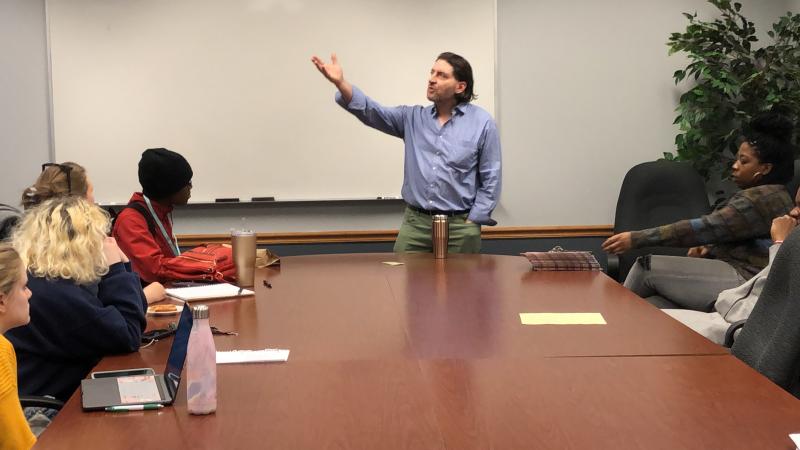 Photo by Jeremy Biello
Rich Weiss talks to students about the importance of community news.

The Cleveland State University Student Chapter of the Society of Professional Journalists recently hosted Rich Weiss, publisher of the Tremonster, a community-written, online and print newspaper for the neighborhood of Tremont, who said that community media are not in danger of dying.

Weiss also serves as the president of Neighborhood Community Media Association of Greater Cleveland, a nonprofit organization that supports media production by and for the citizens of Cleveland, and as the executive director of Neighborhood Media Foundation.

Speaking to a group of more than 15 journalism majors and others, Weiss said the world isn’t in Los Angeles or in New York City, and where there is a message or stories about communities that care, that’s where a person needs to be as part of the person’s personal mission. He said it is important to do everything a person can to produce content.

For the journalists who speculate whether journalism is dead, Weiss explained that community journalism is the future because “you can’t reach people through digital. Regional is dead, not print.” To him, journalism can tie a community together through trust between the reporter and the writer, adding that he feels a paper can look out for the people.

To Weiss, trust is an essential fundamental of journalism. “All it takes is to tell the stories that no one else is telling,” he said.

He stressed there are unlimited options for types of stories to be told and ways they can be told. He said that it was important for the students who will become future journalists to find new and creative paths to tell important and personal stories, not just to copy what has already been done.

Weiss said he began his academic life as a theater major who loved communities. He said he appreciated the arts communities while he lived in Los Angeles before moving back to Cleveland. When he returned, he became involved in the Ingenuity Festival, which allowed him to meet with local artists and discuss with engineers why they worked with artists.

Weiss developed his interest in communities and the media through his time as an advertising salesperson and writer for Cleveland-area newspapers, such as The Call & Post, The Plain Press and The Collinwood Observer.

After he was done speaking, Weiss encouraged students to ask him questions and handed out his business card to those who were interested in contacting him for further questions.