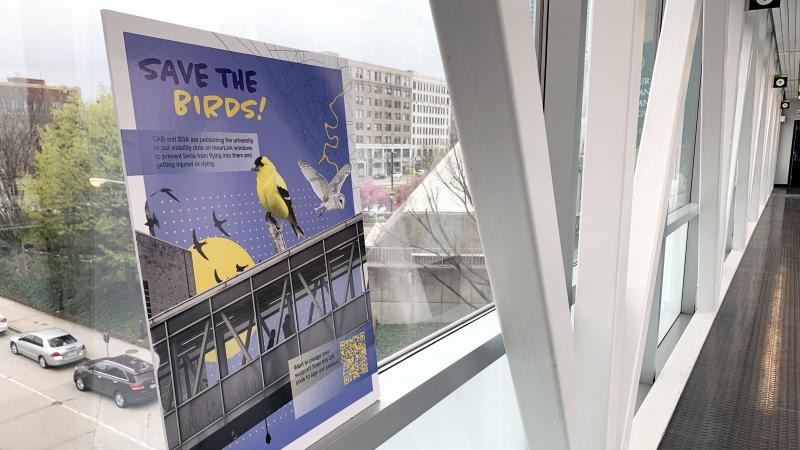 Credit: Eric Seitz
The Save the Birds initiative aims to prevent Northeast Ohio birds from inadvertently flying into the windows of the InnerLink

CSU teams up to 'Save the Birds!'

The Student Government Association, Campus Activities Board and the Department of Sustainability are heading up a university-wide petition, advocating to protect Northeast Ohio birds.
By ERIC SEITZ

SGA, CAB and Cleveland State University’s Office of Sustainability are petitioning the CSU administration to install visibility dots on certain campus windows to prevent birds from flying into them and getting injured or dying.

“Me and my friend always see dead birds lying on the sidewalk when we’re walking to class,” said civil engineering major Yara Cavanaugh. “It made us so sad that we started taking a different route.”

The initiative was kicked off at CAB’s Give Back Cleveland event on February 23, when students could sign the petition, paint their own birdhouses and meet an owl from the Ohio Bird Sanctuary.

Since then, the two organizations and the office of sustainability have been collecting signatures of students, faculty and staff who support the cause.

“Our movement to save the birds has a lot of purpose behind it,” said Give Back Cleveland event planner Zeina Hammoud. “We want to limit bird collisions and deaths while allowing window access for students on campus.”

According to the Office of Sustainability, the petition will run until the organizers can convince university leadership to install the dots on the designated campus windows, though they did not specify how many signatures they require before appealing to the university. The office estimates that the dot installation would cost about $8,000.

To read about and sign the petition, head to https://docs.google.com/forms/d/e/1FAIpQLSdVozoUjbuvi_lpB5_2KJDw4l4HBVyuBvJMVZFiDifoC9sRrg/viewform