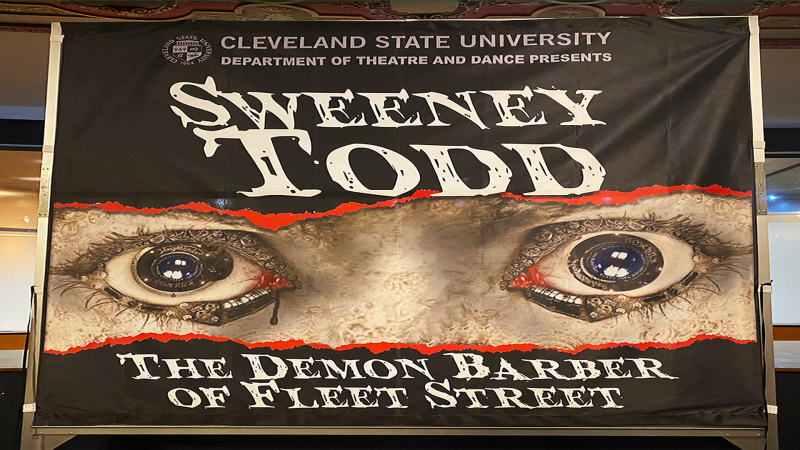 Credit: Lydia Kacala
The musical tells the story of a man who was wrongfully imprisoned and his approach to revenge on the judge that convicted him.

The Cleveland State dept. production of Sweeney Todd: The Demon Barber of Fleet Street was performed at The Allen Theater in Playhouse Square from Nov. 3 through 13.
By LYDIA KACALA - posted Nov. 22, 2022

The Cleveland State University’s Department of Theatre and Dance performed their rendition of “Sweeney Todd: The Demon Barber of Fleet Street” at The Allen Theatre in Playhouse Square from Nov. 3 through 13.

“Sweeney Todd: The Demon Barber of Fleet Street” tells the story of a man, Sweeney Todd, who was wrongfully convicted of a crime and imprisoned. He returns from his time in prison full of anger towards the judge, who now has custody of Todd’s daughter.

Todd meets and befriends Mrs. Lovett, the owner of a terrible meat pie shop. He opens his barber shop above Lovett’s and what follows is a story of revenge and terror.

“This production broke records in the number of students that auditioned,” said Holsinger. “Majors from all across campus auditioned and there was a range of freshmen to seniors.”

Claudia Cromley, a theater major, portrayed Mrs. Lovett, the partner in crime to Sweeney Todd, who was portrayed by Eugene Sumlin, a professional actor provided to the school by the Actors’ Equity Association.

“With a professional actor playing Sweeney Todd, we had to abide by the rules of the actors union,” said Holsinger.

The cast and crew were tested for COVID-19 twice a week during the production as per the rules of the actors union, Holsinger explained. Through the weeks of work put into the production, there were no cases, allowing the show to be performed in a public setting.

“It feels really great to be back doing theater in this big way and to have students back in person because what we do needs to be live,” Holsinger said.

The production, turned movie-musical in 2007, drew in crowds excited to go on a journey of horror with the cast and crew.

The stage props and lighting played a large part in the creation of the atmosphere during the performance.

“The scenery was amazing,” said Jay Broz, a member of the audience on Nov. 4. “They put a lot of hard work into that.”

The production earned audience approval, evident by their applause throughout the evening.

“I loved the skits and jokes that were a part of the show,” said Broz. “I think they really did a nice job.”

The final production the Department of Theatre and Dance produced for 2022 was the CSU Devised Theatre Workshop Production from Nov. 17 through 20.