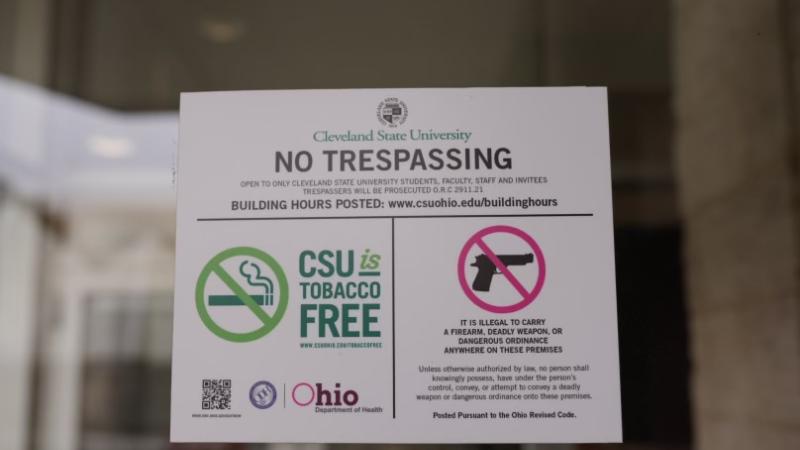 Credit: DeAndré Patrick
CSU's no guns policy on display at the entrance to the Music and Communications building, Oct. 20, 2022.

Cleveland State students show they don’t want guns in the arms of those who are supposed to educate students. Instead, they voice their own thoughts on safety on campus.
By KIRSTEN BEARD - posted October 20, 2022.

CSU students voiced their thoughts about the gun laws in Ohio, potentially arming teachers, and the criteria they believe is needed to purchase firearms.

CSU junior Kallie Pretnar was typical of the non-representative sample of students surveyed on the issue for this article. She said guns in the pockets of teachers would be an ineffective way to improve safety on campus.

“Considering that my sister and my mom are both teachers and I could really never see them doing it," Pretnar said. "I understand the point of what they (gun advocates) are trying to do, but I don't think that it's really the most effective.

As of September 12, 2022,  Ohio law has permitted teachers to carry a fire-arm on school grounds and has slashed the amount of training needed to carry for Ohio teachers.

For the general public in Ohio, it is legal to open carry and conceal carry without a permit. This means anyone 21 years and older can buy and carry a weapon without any kind of training or permit. The Gun Violence Archive reported that guns were used to murder or otherwise kill 874 people in Ohio in 2021. Almost 1,798 gun-related injuries were reported.

Pretnar suggested that instead of having armed professors on campus, measures like using student ID cards to control access to buildings for classes around campus might be a better idea

“They should lock all the buildings way more than they already do,” said Pretnar. “Or have it so you can only get in with your student ID.”

As of now the Student Center along with the Music and Communication Building, and Science Building do not require you to scan a key card or student ID, allowing anyone to enter through the doors at almost any time of the day or night

Camille Zentner, a CSU freshman, said the presence of police on campus was a comforting part of her daily routine.

“I see the officers around campus and the blue lights everywhere and all of that, so I feel fine.” Zentner said.

She was concerned though at the recent changes to Ohio's gun laws, making it easier for poorly trained people to make mistakes.

“I don't think it's a good idea [to give teachers guns] because that just gives so many more opportunities for things to go bad,” Zentner said. “Teachers aren't like police officers where they're trained to have guns every single day and know what's right and wrong.”

Cleveland.com surveyed Ohio's public and private universities and 2-year colleges to find out how administrators were responding to the new gun laws. The consensus, including CSU, was that the state's institutions of higher learning would do nothing and make no changes to their current policies..

Perhaps the administration could take its cue from students. Yes, no more guns. But other measures would be welcome.

“It (a gun) would really only make me feel safer if I know that they are very, very well trained like to the point of going every single month or, you know, whatever,” Pretnar said. “But I also think things such as security systems or things like that, I would say would make me feel safer first.”