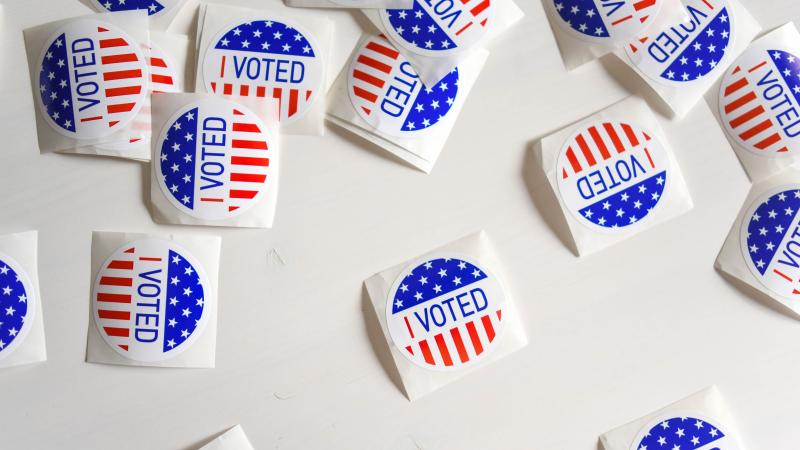 Credit: Photo by Element5 Digital | Unsplash
I voted stickers are seen on a white background.

OPINION: Midterm meltdown — students are not voting in elections, here’s why.

Despite the current political climate students are still not showing up to the midterm polls, from outside pressure to not knowing the issues, why have students decided that the one action they can do that affects politics is one they shouldn’t do.
By FRANK MECHAM

Earlier in the month, the midterm elections offered voters a chance to decide on a special election of two congressional positions, local ballot issues, school boards and, for Clevelanders, the next mayor. But when I made my way around campus on election day, I noticed many of my fellow students were talking about anything but.

This makes me wonder, why during a time of social and economic change is the issue of voting seemingly pushed to the side?

When I talked to my fellow students, the reasons for not turning out to the polls were varied and some came as a surprise. The main issue as to why students are not voting seems to be a disconnect with seeing voting as a valid way to make their opinion known.

“Why would my vote matter, even when we do vote in people that I like, it doesn’t change anything,” said one CSU student.

Most students, when asked, vaguely knew a midterm election was being held this month. But almost none knew of the issues on the ballot or even when they could vote even though most of them did turn out for the presidential election.

”I just don’t see how this affects me, I’m too busy to worry about the election when I have [a] child to worry about,” said one CSU student.

Some might see this as students not caring about the issues or being too lazy to stand in line to vote. But I think that might be overlooking the larger issue of students, or let’s be honest, anyone, in seeing voting as a viable solution to the social problems we face today.

We are told at a young age that voting is a way to be heard, to make an actual change in government. But my generation has only seen voting as a way to manipulate who is currently in power, the outcome of who is elected almost never matters as it doesn’t trickle down to change our lives in a meaningful way.

Midterms and special elections especially have always seen lackluster turnout, these types of elections have vague ballot issues and officials being elected into positions that most people might not even know about.

Only the most committed voters are going to show up for these elections, leaving few to decide major policy. For example, in the presidential election student age voters turned up, 52%-58% of voters aged 18-29 voted. Compare that to the average turnout rate of 39%-40% for midterms.

We still face outrageous student debt, housing prices that have never been higher and a government that bails out banks but is unwilling to invest in the population. Why would anyone think that changing the face of the people who make the rules will change the way we are being governed?

To bring people back into the fold we need to frame voting as something else, not a popularity contest, but as the one approved way to voice your opinion. It needs to be viewed as one tool in a larger bag, that we all have access to.

The most important thing to remember is that those in power will try to take power away from us, the population, by targeting the tools we use to shape the society we live in. Currently 19 states, including Florida, Georgia, Iowa and Texas have passed voting restrictions making it harder for people to vote. This should scare you, those in power know how they got there, and they are trying to actively take away the one tool that is easily accessible.

It might seem like a small thing, but voting for school boards, local ballot issues and the mayor all have more impact than the presidential election, and the people that recognize this vote.

Yes, we do have to do more than just vote. In a perfect world we should all be involved in our local government, know who represents us by name and where they live.  But the reality is we have school, tests, jobs, family and friends. So, the least we can do is…. vote, unfortunately.