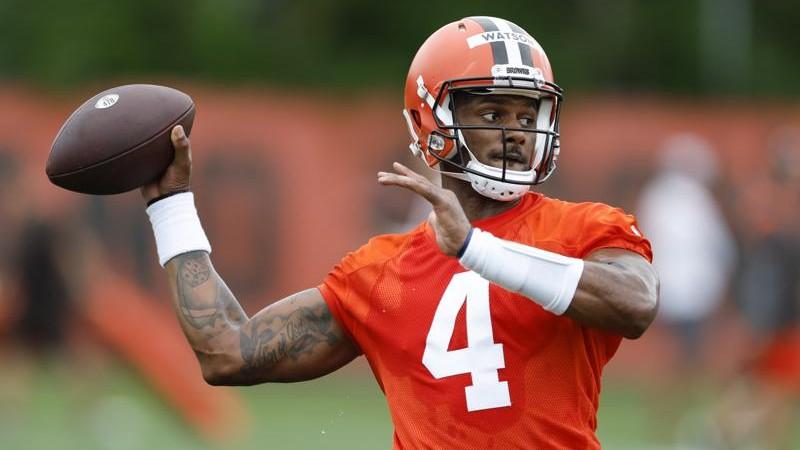 Opinion - Deshaun Watson highlights a flaw in the NFL

Deshaun Watson’s return to the NFL with the Cleveland Browns is a product of the NFL’s messy code of conduct policy.
By MASON COLE

Deshaun Watson was officially reinstated by the National Football League Nov. 28 after serving an 11-game suspension for violating the league's personal conduct policy. It is safe to say, Watson will not be welcomed back to the league with open arms as his first game with the Cleveland Browns will be against his former team, Houston Texans, at NRG Stadium on Sunday, Dec. 4.

There will be many fans in the stadium Sunday who believe that Watson not only should not be playing this season but should never step foot on a football field again.

Watson has been accused of widespread sexual harassment. The quarterback settled civil lawsuits with 23 different women, all represented by Texas lawyer Tony Buzbee; one woman declined to settle her lawsuit with Watson. Several of the women also filed criminal charges against Watson, but two Texas grand juries declined to bring charges against him.

In August, the NFL and the NFL Players Association suspended him for 11 regular season games without pay and fined him $5 million.

Watson violated the NFL’s personal conduct policy in private meetings with massage therapists while he was with the Texans, Judge Sue L. Robinson, said in the initial ruling after the NFL and the NFL Players Association appointed her to decide on Watson’s punishment.

Watson’s “pattern of conduct is more egregious than any before reviewed by the NFL,” Robinson said, adding that Watson’s “lack of expressed remorse” factored into her decision.

Watson's reputation as a person might be in tatters, but his value as an NFL asset is not in doubt.

In March, the Browns traded three first-round picks, one future third-round pick, and two future fourth-round picks, to the Texans for Watson. Following the trade, the Browns gave Watson a fully guaranteed five-year, $230 million contract, making Watson one of the top-paid players in the league.

The Browns and their owner Jimmy Haslam have been widely criticized for this move. But this was not the first time a player with questionable off-field antics was given another chance by a team. The Browns are merely taking advantage of the system the NFL has fostered which allows players with these types of issues to thrive.

Under league commissioner Roger Goodell, the NFL's code of conduct policy has been wildly inconsistent.

Players like wide receiver Josh Gordon have had their careers ruined for what seemed to be mundane offenses. In 2013, Gordon, who played for the Browns at the time, was suspended for the first two games of the season for violating the league's substance abuse policy. The following year, after failing a drug test for marijuana, Gordon was suspended for the entire 2014 season. Gordon had a historic year with the Browns in 2013, racking up a league-leading 1,646 receiving yards and nine touchdowns and being named a first-team all-pro. One year after that, his career was effectively ended because of the second substance-abuse violation.

The NFL ended Gordon's career because of his actions. Now, it was Gordon's fault as he was unable to follow the league's mandated protocols. But the inconsistency in the NFL's conduct policy can be seen when you compare what happened with Gordon to what happened in another instance with the suspension of Baltimore Ravens running back Ray Rice.

In 2014, Rice, who had been a Pro Bowl running back three times for the Ravens, was arrested along with his fiancée Janay Palmer and charged with assault after an incident at a casino in New Jersey. Initially, Rice was given a two-game suspension by the league along with a $58,000 fine.

The punishment for Rice seemed light, even with the minimal information that the public knew about the case. Then, TMZ published a video of the altercation.

In the clip, Rice was seen having a verbal confrontation with Palmer in a casino elevator. The couple were both intoxicated. Rice was then seen striking Palmer and causing her to fall unconscious. The end of the video shows Rice dragging his unconscious fiancée out of the elevator.

After the video was published, the Ravens terminated Rice's contract with the team and the NFL eventually increased his punishment to an indefinite suspension. Rice never played another snap in the NFL.

Prior missteps in the NFL's code of conduct policy have resulted in cases like Watson's being confusing to handle. The problem that the league ran into was that unlike in substance abuse cases, the league had no prior precedent of substantial suspensions for players who committed assault or sexual misconduct.

The NFL's most recent collective bargaining agreement (CBA) which was reached in 2020 implemented an independent arbitrator to handle player suspensions. So, instead of Goodell handling Watson's suspension as he did for players like Gordon and Rice, former U.S. federal judge Sue L. Robinson handled the case. Another point noted in the agreement was that although Robinson was the arbitrator, the league would have the final say on all suspensions.

The NFL was hoping that Robinson would decide to suspend Watson for at least a full year. What Robinson ultimately decided was that the league had no precedent in past "non-violent" sexual assault cases to do so. Robinson eventually decided that based on the NFL's past handling of their CBA, Watson was only deserving of a six-game suspension. This decision was received with public backlash and the NFL swiftly appealed Robinson's ruling. Watson and the league eventually settled the dispute with an agreement on an 11-game ban.

Because of a lack of criminal or civil charges, the Browns were willing to give Watson a second chance, and because of their prior mishandlings of similar cases, the NFL had no way to fairly give Watson a punishment that was as severe as they had hoped.

Deshaun Watson's case highlights how poorly the NFL has handled cases of sexual misconduct in the past. With their past punishments of Rice and other players, the NFL has shown that it does not take cases of assault or misconduct seriously.

If the NFL continues to handle its conduct policy poorly, players like Watson will be given second chances. A situation like Watson's does not give the Browns the opportunity to take the moral high ground. As long as Watson was eventually eligible to play again, an NFL team was going to trade for him. When on the field, Watson is a top player at the most important position in the league. If not Cleveland, another team would have acquired Watson. For a team that has been terrible for decades, the Browns simply decided to take advantage of the NFL's broken system by trading for Watson. Whether that plays out for the Browns will begin to be seen on Sunday.