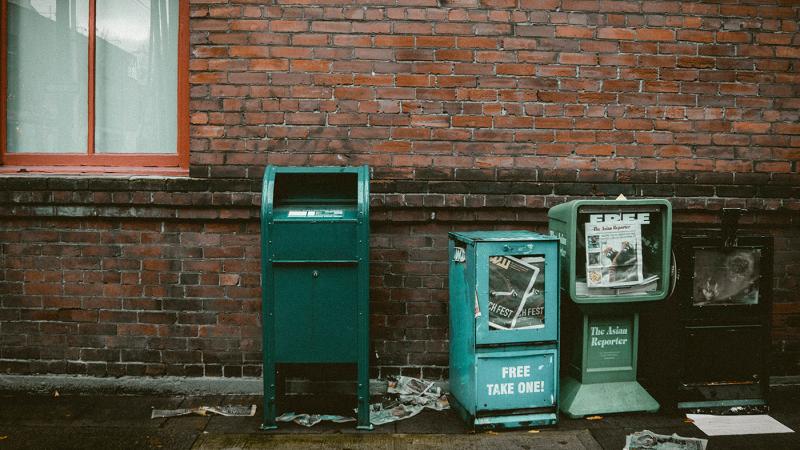 Credit: Zachary Keimig via Unsplash
Google Trends shows that searches for “fake news” peaked in February 2017. It shot up from a trend score of 6 in September 2016, to a score of 100 in February the following year.

Recognizing the news you should and shouldn't trust.
By MICHAEL JANKUS

Over the past four years, the words "fake news" have exploded in usage. President Donald Trump likes to take credit for the creation of that term, but since it’s a simple construction of two common words, one shouldn’t be surprised to learn that Google Trends data shows search activity for “fake news” going back as far as the earliest date in the archives, Jan. 1, 2004.

Trump is not entirely wrong though. He was certainly not the first to say those two words together, but once he did they would never be the same.

So then, what is fake news? It’s important to fully understand what it is, so that one can recognize it before them and begin to rebuild trust in the media. When discussing fake news, what we are often talking about is misinformation.

Misinformation is an umbrella term underneath which we find all manner of falsities. Intent matters when labeling what kind of misinformation something is. Sometimes reporters make mistakes or exaggerate, and sometimes they don’t have all of their facts straight. These are examples of misinformation in which false information has been shared that could be mistaken for truth.

Misinformation and disinformation are the preferred terms for news that is false. They are concrete in their definitions and though it can be impossible to prove someone’s true intentions, they serve to distinguish bad faith actions from honest mistakes.

If misinformation and disinformation are news-that-is-fake, then what is fake news? Fake news, from this point forward, will be used only to refer to the Trump era social media phenomenon. To avoid confusion, fake news is here distinguished from news containing fake elements.

As stated earlier, Trump is not entirely wrong about owning the term fake news. The Google Trends data that proves he was not the one to coin the term also shows that searches for “fake news” peaked in February 2017. It shot up from a trend score of 6 in September 2016, to a score of 100 in February the following year.

According to the Public Data Lab, fake news is a deliberate lie with a political agenda that gains enough traction on social media that it appears credible just by the size of its reach and number of shares. Eventually these stories are picked up by blogs and other outlets, which give them even more reach and believability. Because of the way social media algorithms work, the content that gets the most engagement goes on to be recommended to more people. Because of the way our brains work, the content that we engage with the most is content that makes us mad.

Putting everything together into one succinct definition of fake news gives us this:

Fake news is news that is created from scratch (though sometimes the stories are inspired by real photos stolen from old news stories and given phony context) with the intent of causing outrage or controversy on social media and going viral, inspiring increasingly extreme views on both sides, and driving supporters of the two parties further apart.

Wait, That’s What Fake News Is?

You wouldn't know it from watching the head of the executive branch talking about fake news on television, but, yes. Pretty much.

Trump’s inconsistent usage of the term makes it difficult to tell what fake news means to him (he once called CNN's Jim Acosta himself fake news), but that’s the unofficial definition some experts have settled on. Plenty of stories that have been called fake news by him and others obviously do not fit that description. Fake news certainly is real, it's just not the same thing as biased or unfavorable coverage, and it isn't on cable news where you should be weary of it.

The reason all of this is so important is because the relationship between the press and the people has been greatly damaged. People in general don’t trust the news as much as they once did, and they can’t be blamed, because they have been told two versions of the truth for four years.

When Joe Biden is sworn in on January 20, 2021 as the 46th president of the United States, a change in leadership will also bring a change in rhetoric. Presumably, the attempts to constantly undermine the press will come to an end and the healing process can begin. The path to rebuilding that trust must start at the top, but everyone has their part.

Since there's no way to make fake news magically go away, the way we restore the relationship between people and the news they read must be through news literacy.

The easiest way to avoid misinformation in the first place is to stick to a few reputable sites for your hard news. Fake news festers on social media where the clicks and shares come easy; stick to trusted sources for your hard news and read the same story from multiple outlets if you have the time. A news aggregator such as Google News is a great tool to see stories from various outlets neatly in one place, and there is probably one already installed on your phone.

In reality, a lot of fake news is very low-effort content, often produced outside the country. Fake stories that earn thousands of shares on social media can be nothing more than a controversial headline and a doctored image. The most straightforward way to detect fake news is just to click on it. Is there a full, well-written story on a professional looking website on the other end of that link? Fake news looks a lot less convincing under a microscope (or on a janky WordPress site) than it does on a social media feed.

There are even more clever ways to sniff out fake news. A simple reverse image search of a dubiously captioned photo can reveal its origins and debunk whatever clickbait it is being misused for. For those less inclined towards investigation, Snopes and PolitiFact are excellent, professional fact-checking sites, who fact-check everything from online hoaxes to the claims made by elected officials.

These sites are also worth a browse to stay two steps ahead of fake news. There you can find all the latest hoaxes that are going around, or coming back around. It’s common for the same fake story to resurface periodically, and Snopes and PolitiFact have already done their due diligence on many stories that are likely to to make the rounds again sometime.

Another pair of terms that have been used alongside fake news to sow distrust are “mainstream media” and “liberal media.” While there isn’t really a liberal conspiracy to mass indoctrinate the public, there is actually a real, observable liberal bias in the media, but it’s not as scary as it may sound.

Fox News is the largest source for conservative news. There are also the New York Post, The Wall Street Journal Opinion, Breitbart News and The Daily Wire, but the bulk of the conservative news sphere is composed of relatively small outlets. These smaller outlets, such as OANN and Newsmax, cater more to the alt right and do not shy away from giving equal weight to baseless claims.

Compared to all of the media giants that lean left —The New York Times, CNN, The Washington Post, ABC, NBC, TIME, The Huffington Post, The New Yorker, etc.— it may seem unfair that there aren’t as many conservative viewpoints in the national media.

Keep in mind that bias is not misinformation, and that the same set of facts can be viewed from different perspectives, without either being untrue. That is all bias is; a perspective. Most of the largest media companies do share a similar perspective, a similar bias, but that doesn’t mean every story has bias or that you can’t trust mainstream media to tell the truth.

The New York Times and CNN may or may not share your beliefs and values, but be assured that they are still trustworthy and honest news sources.

For news with less partisanship, there’s always NPR, AP, Reuters and the BBC.

They say it’s easier to fool a man than to convince him he’s been fooled.

Fake news creates a dangerous cycle. When someone feels like they can’t trust the news on television and in the papers, they are driven to darker and darker corners of the internet in search of the real truth. They are led down a rabbit hole until they find themselves in a paranoid echo chamber of lies.

But there is a way back.

It all starts at the top with the example set by the president, but to make things right it's going to require better news literacy from all of us, because fake news isn't going to go away on its own. Learn how to spot the fake news, but just as important, learn to trust the real news again.