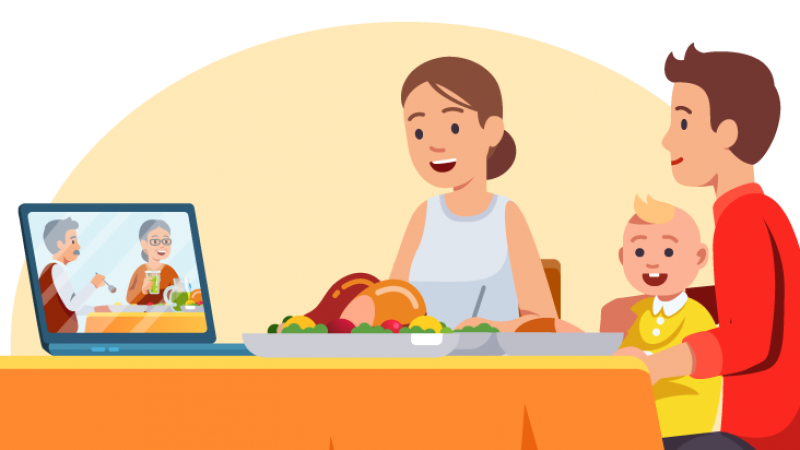 COVID-19 has demanded that we all change our plans rather drastically. The Cleveland Stater asked Cleveland State University students how they chose to change their Thanksgiving plans this year. All the names have been changed.

Some, like sophomore Anita James, opted for a small gathering that was socially distanced.

Others, like senior John Jameson, opted for dinner in shifts.

“Unless they wipe everything down and they take it very, very seriously it’s not going to be very effective,” Jameson said. “My grandparents on my dad’s side both don’t take it that seriously. They take it seriously yet they don’t understand how to take it seriously. My grandparents were talking about it yesterday -- how cases are going up -- but whenever we see each it’s just the same thing with little changes that won’t change anything cause we’re all touching the same stuff.”

Some students have chosen to stay in the dorms for Thanksgiving. Junior and Resident Assistant Jim Kraken has chosen to stay behind and help supervise on the holiday.

“On the actual day of Thanksgiving I took the on-call shift for the residence halls,” Kraken said. “I actually work as residence assistant, or an RA, so I took the shift working here all day. It’ll be 8 a.m. [Thanksgiving day] to 8 a.m. the next day. It’s not going to be super fun. I don’t think I’ll be having any ceremony dinner.”

“Part of my rationale behind making that decision was that [my family wasn’t] going to be having a large family gathering with extended family. It would have been something with my immediate family, so my train of thought was ‘hey, why don’t I take a bullet and work that shift,’ since Thanksgiving was sort of quote-unquote 'canceled' for us anyway. The day after, on Friday, we’re going to recognize Thanksgiving on that day instead with a dinner with my immediate family.”

Though Kraken won’t be attending any holiday feasts, the Stater asked if he was worried about his residence returning after attending large banquets.

“It does worry me and it did worry me,” Kraken said, “but what does put my mind at ease is that, and we’re waiting to get the official details and residents have been made aware of this, Resident-Life is requiring that residents abide by certain policies and procedures to where there might be some self quarantining, some self isolation depending on if their coming or going from a hot spot.”

Students returning to the dorms will find the same precautions they had on move-in day. COVID testing will not be mandatory for returning students but will be offered. Tests are provided on a “first come, first serve basis.” Call the Health and Wellness Services at 216-687-3649 to schedule an appointment to be tested. Cleveland State University’s COVID updates can be found here along with their COVID Dashboard.