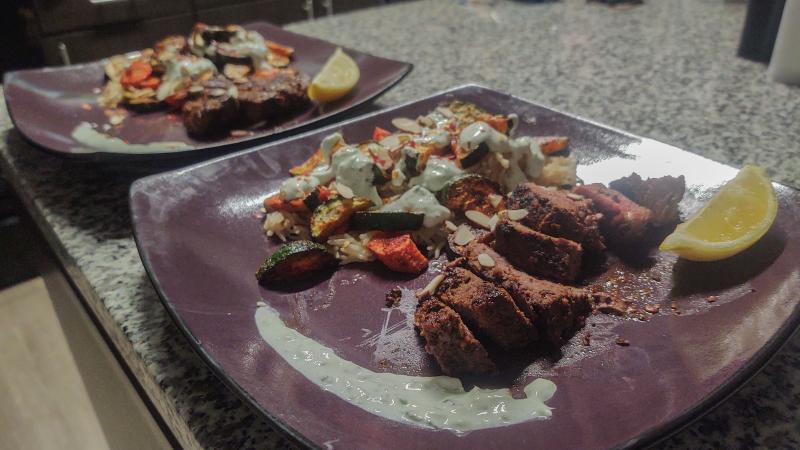 Sydney Egger and her roommates ordered HelloFresh through the Campus Activity Board for their Valentine weekend meals.
By COURTNEY BYRNES

Walking into the four bedroom, off-campus apartment, you’d have noticed three unmistakable lime green boxes with the HelloFresh logo on the side. Each contained three meals picked out and delivered to three of the roommates.

After hearing that the Campus Activity Board was hosting a “Date Night on CAB” event in which they could each pick three HelloFresh meals, the four college students jumped at the chance before registration filled up.

Sydney Egger decided on the pork tenderloin for her first meal, which went along with one of the meals CAB made in their videos, and added the Middle Eastern steak and veggie soup for her second and third dishes.

Egger made the Middle Eastern steak for her dinner on Friday, the same night many other students were receiving and trying out their own selections.

First, she prepped the vegetables which were provided pre-portioned by HelloFresh. The carrots needed to be peeled, then chopped up with the zucchini before she tossed them into a pan, drizzled olive oil, paprika, salt and pepper on top and popped it in the oven to roast.

With that all set, Egger turned on the stove top, grabbed a small pot and began to cook the rice. The kitchen soon began to fill with the scent of sweet vegetables and spices. The meal was coming together with just a few more steps to go.

“The process itself is very easy as long as you know some cooking basics,” Egger said.

She prepared the tzatziki in a small bowl, mixing in sour cream, yogurt, half a grated cucumber, salt, lemon juice squeezed from a wedge and a pinch of garlic. Next was the entrée, pre-seasoned steaks.

Egger soon had them sizzling in a pan. She set two plates on the counter and began to divide up the rice, looking to the HelloFresh instruction sheet for inspiration.

“I tried making the presentation as similar to the picture as possible because it’s fancy,” Egger said.

With the rice as a foundation, she then took the roasted vegetables and set them on top, allowing them to cover and spill over the whiteness of the rice, adding a pop of color to the dish.

Once the steaks were cooked to preference, one medium well and the other medium rare, Egger sliced and splayed them across the right side of the plates to balance out the presentation.

Her finishing touch was the tzatziki. She drizzled it on the left side over the rice and vegetables, then added a swipe of the sauce to the bottom edge of the plate as garnish. She sprinkled almonds on top and served the dish with a lemon wedge on the side.

After all her hard work, Egger was finally able to sit down and enjoy the mouth-watering meal she had made. And she was pleasantly surprised that she could produce so promising a result from a delivery meal-kit.

“It was one of the first times I have ever liked zucchini when I tried it,” Egger said. “So I was very surprised with how good all of the meals were for being mailed to us.”