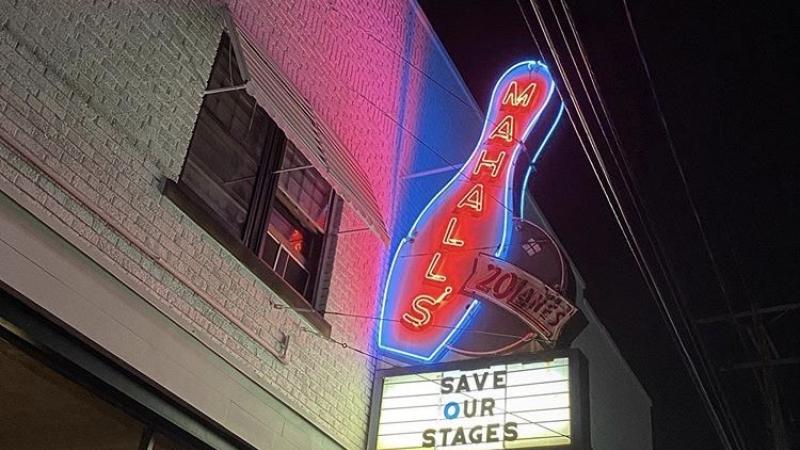 Credit: Hannah Hines
The Mahall’s 20 Lanes Marquee lit up in Lakewood in Sept. 2020

On a Friday or Saturday night, Mahall’s 20 Lanes, a music venue and bar, is usually filled with Clevelanders. From couples on a date in the bowling alley, to friends drinking at the bar, to strangers dancing along, to a local band playing in the locker room.

Because of the COVID-19 pandemic, Mahall’s hasn’t seen a crowd like this since March.

Without being able to open their doors for concerts or events, they have had to get creative just to pay their bills.

One of the ways Mahall’s is raising funds is through the crowdfunding platform, Kickstarter. Kickstarter allows anyone to create a fundraiser, as well as set rewards and prizes for various donation tiers. Mahall’s Kickstarter began the first week of September and closed donations on Sept. 23. The fundraiser surpassed its goal of $15,000, collecting over $35,000 from more than 600 backers.

Sarah Bene, a 20-year-old film student at Cleveland State University, said she contributed to the Kickstarter to help keep the community space going.

“I’ve been going to Mahall’s since I was very young,” Bene said. “I grew up in Lakewood, I live there now, so Mahall’s holds a special place in my heart.”

Small businesses, like Mahall's, have been struggling to stay open during the pandemic and have needed extra support from their usual patrons.

“Especially during the time of a pandemic, it’s extremely important to support small businesses,” Bene said. “Mahall’s is such a unique one, because it’s not a chain. They offer so many unique entertainment options, from the bowling, to the live music,” Bene said.

Some student’s feel as though a space like Mahall’s offers a unique community space for themselves and friends, and without that many communities would lose a vital place.

Backers of the Kickstarter will receive various rewards depending on the amount of money pledged. Rewards include personalized book suggestion lists, having their names added to the “We Saved Mahall’s” wall, and merchandise such as pins, art and photography prints, T-shirts and tickets to shows at the venue.

“I feel really lucky that, as of now, they’ve been able to remain open over the past several months,” Mills said. “From what I can tell, they surpassed their goal pretty quickly. I think that alone goes to show it’s luckily working, so far at least.”

After nearly 100 years of being open, Mahall’s have become an active and inviting space for some student’s to feel connected to the music community and the Cleveland community as a whole. Mills is one of them.

“I think they just have shown themselves to be an active and engaged space, that is there to serve the community,” Mills said. “Over the years, I’ve gotten to know the staff there and I think the way they’re set up, it comes off this way. . . almost like a co-op. Them providing that to the community kind of makes up that vitality.”

In addition to their Kickstarter, Mahall’s has opened an outdoor patio for patrons. They have also  hosted virtual events and talks, as well as a few small in-person events such as a solo art exhibition from the artist Lauren Pearce, and food pop-ups with Parky’s Burgers, Biscuit Heads, and Despina’s Bakery.