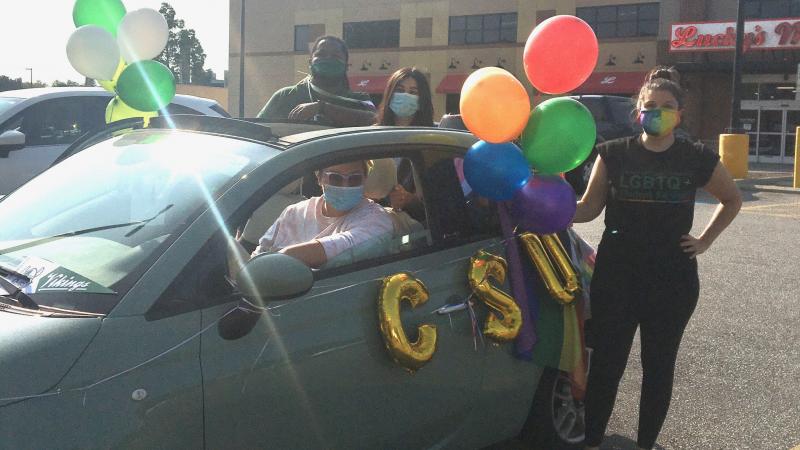 Credit: Sammy Motes
A CSU student standing by one of the cars in the CLE Pride Ride.

Cleveland State University took part in the annual CLE Pride Ride and virtual Pride in the CLE events, which took place in September at the LGBTQ+ Community Center on Cleveland’s West Side.

“We had two cars in the Pride Ride, and it was an amazing time riding through the different neighborhoods and seeing all the different decorative cars,” Motes said. “I have been attending Pride events for about 3 years now.”

The events allow the LGBTQ+ community and its members to come together and celebrate in the Cleveland area. The events normally take place in June but the LGBTQ+ Community Center delayed them to September because of the ongoing COVID-19 pandemic.

In the Pride Ride, people decorated their cars and trucks and drove through the Gordon Square neighborhood, where community members watched and applauded from their homes and local businesses.

Following the Pride Ride was the virtual Pride in the CLE event, which took place on the evening of Sept. 25 at the LGBTQ+ Community Center. Even though people were not allowed to attend, they were able to stream it live from all of the Community Center’s social media platforms.

The event was hosted by drag star Veranda L’Ni and headlined by bands Apostle Jones and Kyle Kidd & CO. The evening consisted of local artists, musicians and local leaders. A range of organizations also sent in videos to support the LGBTQ+ community.

Timeka L. Thomas Rashid, assistant vice president of CSU’s Inclusive Student Engagement, was one of those who sent in a video to show support for LGBTQ+ students.

“At Cleveland State, the city is our campus and LGBTQ+ people are a valuable part of both our city and our university," Rashid said.

Rashid said that COVID-19 has affected everyone including the LGBTQ+ community.

“The last several months have been challenging for many and we know that the LGBTQ+ community has been faced with additional hardships and injustice but the spirit of pride remains and we support you, we celebrate you, and we are proud,” Rashid said.

Anyone who missed the Pride Events this year can attend them next year on June 4 and 5.