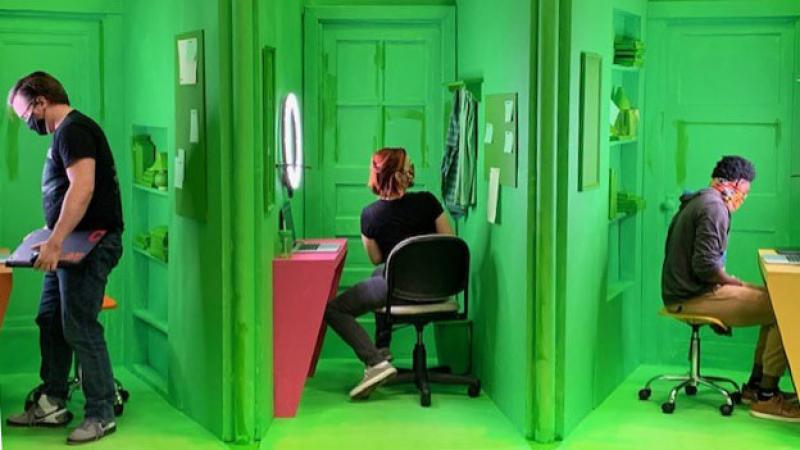 Cleveland State University’s Department of Theatre and Dance is putting on a live yet virtual production of Red Bike from March 11-13, the first of two such performances scheduled for the spring season.

Normally audience members would be welcomed into the ornate Allen Theatre in Playhouse Square to watch Cleveland State students’ performances, but as live theater adapts to these times of COVID-19, you will only need to go as far as your computer to experience the production of Red Bike.

“This is kind of where theatre is going in the United States right now. Some theaters have totally shut their doors but others are beginning to experiment with this new medium and see what’s possible. So we’re just jumping on the bandwagon.” Holly Holsinger, the director of Red Bike, said. “We want to continue working, we want to continue giving our students opportunities and providing artistic productions for our CSU community.”

The theatre department has created a “pandemic theater space” in the scene shop where they usually build sets. This stage consists of five cubicles, so each actor has their own space, and has been painted entirely in bright green to be utilized as a green screen for the virtual productions.

There is a camera in each of the cubicles to capture the actors individually as well as an outside camera to capture all five actors at once.

“We’re using a software called OBS where you can program when the cameras turn off, where the cameras are on different parts of the screen, so it’s more of a film feel as opposed to a theater staging traditionally,” said Connor Karboski, a senior theater major on the directing track and one of the actors of Red Bike.

Up until this week, all rehearsals have taken place virtually over Zoom but as the actors gear up for the live performances, they have had the opportunity to rehearse on set with each other.

“Those moments of connections that you would never expect, like when you make eye contact with someone or you very specifically hear one person laugh and just those kind of intimate moments that really help you come along in your performance just feel like they’re missing so you really have to create them for yourself,” Karboski said.

Other than filling the live audience-shaped hole by creating moments themselves, the actors have relied on each other to bring up the energy usually found in a live performance.

“What I do now is just use my energy to feed every other member of the ensemble that way they can heighten their energy and then give it back,” Hosea Billingsley, a senior theater major and actor in Red Bike, said. “So we’re just feeding off each other, relying on one another as opposed to the audience.”

Red Bike is a story from the perspective of an 11-year-old written to be a shared monologue performance with two or more actors.

“Even though some people perform this just with one person, she [Holsinger] was able to give us all lines to give these various perspectives that you might not get if you were to traditionally perform it with just one actor,” Billingsley said.

The style of the play makes the story adaptable for the camera with only minor acting, like riding a bike, taking place.

“I really took a lot of time to look for a play that would work on Zoom,” Holsinger said.

The second virtual play of the spring season, The Moors, will be presented April 15-17 in similar fashion.

Tickets for Red Bike, which are free but limited – only 200 total across the three performances – are now available and can be found here.