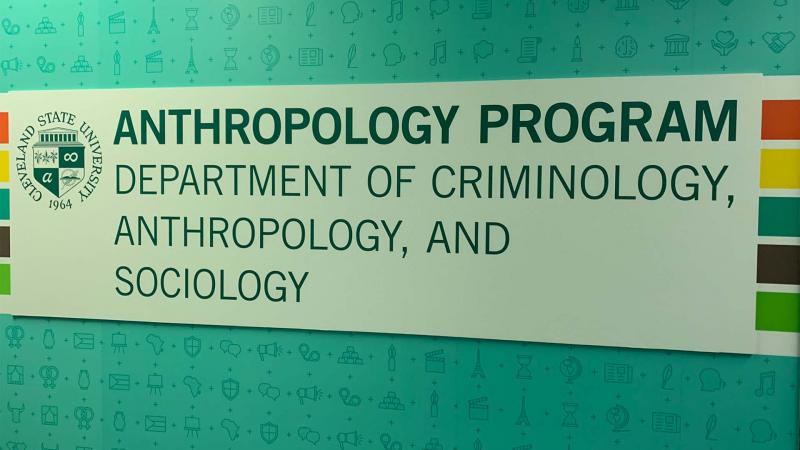 Credit: Jaden Stambolia
The anthropology program is on the 9th floor of Rhodes Tower at CSU.

The university's planned revamp splits anthropology off from its traditional kin in the human sciences.
By JADEN STAMBOLIA

Cleveland State University offers many programs to major in, including anthropology. However, like most programs at CSU, it's unclear how it will fare within the revamp known as CSU 2.0.

Currently, the program -- ranked 177 out of 374 in the U.S. by EduRank.Org -- is part of the Department of Criminology, Anthropology and Sociology. However, the Sociology and Criminology programs are moving to the planned college combining Urban Affairs, Communication, Education, and Sociology/Criminology. Anthropology is moving in with the arts and sciences.

“I’m not 100% sure how we fit within the CSU 2.0 reorganization, but I know we will be stationed in the College of Liberal Arts and Social Sciences or its new manifestation,” Dr. Phillip Wanyerka, a professor in the program, said. “Of course, I am concerned about this reorganization. No one really likes change and so we will wait and see what happens.”

Anthropology abounds with misconceptions -- from images of Indiana Jones to ideas of just digging up dinosaur bones. It is actually the study of us. Anthropologists seek to understand and explain the important questions about ourselves, about the past, present, and future, and all that surrounds the complexity of our human condition.

“The methods and knowledge gained from anthropology and its four subdisciplines are critically important for understanding why we act the way we do and how knowledge of anthropology can affect all aspects of social, cultural, and physical lives,” Wanyerka said. “So in that way, anthropology really is the study of what makes us human. Thus, anthropology allows us to study every aspect of the human condition which helps in connecting everyone on this planet to one another.”

Wanyerka is one of five professors, accomplished in their respective fields, who teach in the anthropology department here at CSU. Wanyerka is a Mayanist and expert in Mayan hieroglyphs.

Wanyerka’s big break came in 1991 when Peter Dunham, another respected and accomplished Mayanist, who is also a professor in the department, invited Wanyerka to join him on a field trip to Belize in Central America.

“Boy, was I excited in 1990 when CSU hired him to be a Mayan archaeologist here at CSU,” Wanyerka said. “Then in 1991, came one of the most profound experiences in my whole life which totally changed me.”

Wanyerka would go to work with Dunham on his Maya Mountains Archaeological Project. Their project led to the discovery of a previously unreported Mayan city that dates to 600-800 AD, which the group named Papayal.

The site was remarkable according to Waynerka as it contained numerous pyramidal structures, a large reservoir, and a ball court.

“There was evidence of carved monuments at this site too which were of special important to me since I was to become the project’s epigraphic specialist,” Wanyerka said. “We set off the following year for a three-month expedition to Belize in which we discovered three new previously unreported Classic Maya cities.”

Those discoveries made news around the world, Wanyerka said.

While students at CSU are not able to make their own Mayan discoveries, they can attend an archaeological field school in the summer that may lead to the discovery of prehistoric and early historic artifacts around Northeast Ohio.

“I especially love my archaeological field school course since I’m out in the sunshine all day and one never knows what they might find,” Wanyerka said. “I love watching the students' enthusiasm when they find something interesting and realize that they are the first to touch those artifacts in centuries or millennia.”

The field school has conducted archaeology investigations at CSU's Mather Mansion. At other previous projects, the field school has worked at a number of prehistoric and historic sites around northeast Ohio including sites in the Cuyahoga Valley National Park, Richfield Heritage Preserve, and the Cleveland Metroparks.

This is the 13th year CSU has had an archeological field school, as the past two years were canceled due to COVID. The school will be conducting archaeological investigations at Hale Farm and Village from July 5 to Aug. 12.

“Our archaeology field school offers students a unique opportunity to learn and experience, firsthand, what it's like to conduct archaeological evacuations,” Wanyerka said. “Students enrolled in the summer field school get to learn how to set a grid, how to use a surveying transit, how to properly excavate, how to conduct laboratory analysis, and how to complete an artifact catalog.”

At Hale Farm, students will be actively looking for both prehistoric and early historic artifacts that are related to the farm to tell more of its history.

If not enough students enroll in the field school, it would be at risk of not happening again, and it potentially could be shut down. This would hurt students and the program as it prepares students for future employment opportunities.

“This course can provide excellent preparation for employment and contract archaeology and for graduate school,” Wanyerka said. “Students interested in history and in the STEM fields can benefit from this experience.”

The success of students

Wanyerka pointed out that anthropology majors or minors have been either the valedictorian for the university or the College of Liberal Arts and Social Sciences seven times since 2012.

“One (graduate) is working as a laboratory technician at Sherwin Williams, one is working as a community engagement specialist for West Park Neighborhood Development,” Wanyerka said. “One owns his own surveying company. I have several who work for various archaeological and consulting firms doing contract archaeology.”

Another graduate is working for the United States Air Force as an airborne cryptologic linguist, someone who translates data that is received or intercepted in the air.

The success of the department - holistic approach

What makes the anthropology department here at Cleveland State successful is the four-field approach that the department takes being linguistics, archaeology, biology, and culture. Not all universities offer a four-field approach with their anthropology programs. Linguistics and archaeology are often regarded as separate disciplines and thus can be found as separate disciplines at some universities.

That is why CSU hosts a Visual and Linguistic Anthropology Center. The director of the center is Barbara Hoffman, an Africanist who studies various cultures in East and West Africa. Hoffman specializes in African expressive culture and culture change, race and gender, and diversity.

Hoffman teaches courses like The Study of Culture, Intro to African Cultures, and Anthropological Theory in the fall. Hoffman also teaches Religion, Magic, and Witchcraft in the spring.

The department also hosts Lydia Grebenyova, a linguist who specializes in theoretical syntax, child language acquisition and Slavic languages. Gerbenyova teaches courses like Intro to Language and Linguistics, Phonetics, and Phonology in the fall. She also teaches Morphology and Syntax, and Linguistic Anthropology in the spring.

For its biological anthropology courses, CSU has Melissa Clark, a bioarchaeologist who has conducted fieldwork in Ireland, Croatia and Ohio. Clark teaches courses like Human Biocultural Evolution, Human Biological Variation, and Medical Anthropology in the fall. Clark also teaches Human Osteology, and Bodies, Burials and Bones in the spring.

Dunham and Hoffman are planning to retire after Spring 2022. However, they will continue to teach at CSU in some capacity. The program will only have Grebenyova, Wanyerka, and Clark as full-time professors. Clark on the other hand is a visiting professor.

Overall, the program will be in need of new hires soon in order to teach all the courses that it offers. At the Senate Faculty meeting, March 30, Provost Laura Bloomberg announced that the university was launching 45 to 47 searches for new faculty this year. Whether any will be for anthropology remains to be seen.

When it comes to teaching about culture here at CSU - the university used to host a Mayan center known as the K’inal Winik Cultural Center (KWCC). The center's beginnings can be traced back to 1986. It was formally established in 2003. The name K’inal Winik stands for “a festival of being Maya.”

Until 2007, the center hosted an annual festival held each fall that celebrated the lives of Mayans past and present.

In addition to the festival, the center presented several lectures, demonstrations, films, public outreach programs and programs for grades K-12 and for college students. It also managed a vast collection of modern Mayan artifacts, books, textiles and exhibits on Mayan culture.

“One of the main public draws of the KWCC was its annual Maya Hieroglyph Weekend," Wanyerka said. "The weekend featured one to two week's worth of public lectures, films, exhibits, and demonstrations culminating with a two-day hieroglyph workshop put on by a top Mayan scholar."

This center made Cleveland State a global hub of Maya scholarship for years. CSU was the second major university to hold annual Maya hieroglyphic workshops in the U.S.

“Scholars and laypeople from around the country would travel here to CSU to hear two days-worth of hands-on lectures and workshops on some aspects of Classic Maya writing and prehistory,” Wanyerka said. “These annual workshops featured world-class scholars, epigraphers, archaeologists, and art historians who all came together to present current hieroglyphic decipherments and research into classic Mayan prehistory and contemporary history as well.”

Although it shuttered 15 years ago, Wanyerka would love to bring the center back to life at CSU as he teaches many courses that focus on Mesoamerica and create a Columbian focus here.

“I always felt that someday I would love to try and bring back and reconstitute the K’inal Winik Cultural Center,” Wanyerka said. “I think it’s time to bring back the center and make CSU once again a capital for Mesoamerican studies or even a more comprehensive center for Native American studies, which I think would be a great step in revitalizing the Anthropology program here.