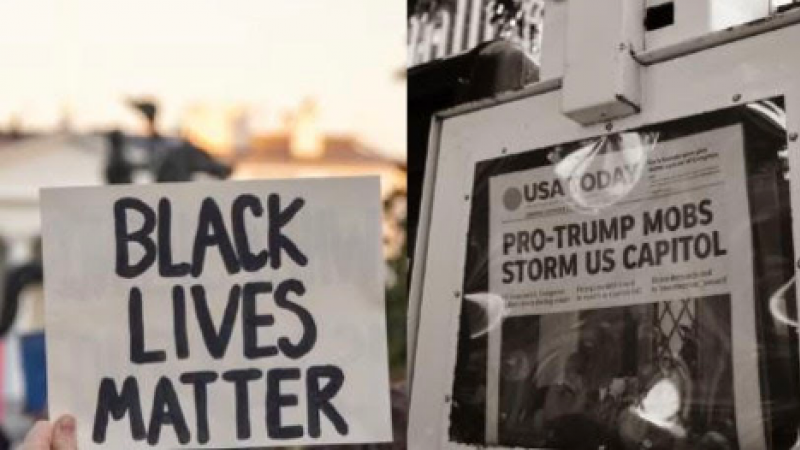 The image on the left shows BLM protesters outside the White House during the outbreak of the summer 2020 protests after the killing of George Floyd. The image on the right shows The USA Today front page of pro-Trump Mobs storming the U.S. Capitol.
By ANDREA STRONG

A month after the riot at the Capitol Building in Washington D.C., students -- including political leaders on campus at Cleveland State University -- discussed their thoughts with The Stater about the Jan. 6 attack on the U.S. Capitol and comparisons some people are making between that mob and the summer's Black Lives Matter protests.

This is what SGA president Renee Betterson, vice president of the CSU Black Student Union Daniell Biggers and future lawyer Nick Hudnell, who is a J.D. candidate at CSU's Cleveland-Marshall College of Law had to say.

Hudnell was upset with the incident at the Capitol Building. He says it was a reprehensible act of domestic terrorism incited by the former president and his associates.

“The purpose of the rioters was to overturn the legal results of a poorly managed democratic election, which was an attack on our fundamental system of governance,” said Hudnell.

The violence at the Capitol Building prompted many to compare it to the Black Lives Matter summer protests sparked by the May 25, 2020 killing of George Floyd.

“These two incidents are incomparable," Hudnell said. "The insurrection at the Capitol was essentially an attempted coup, the BLM protests in contrast were not attempting to assault our democratic principles, but rather wanted the State to uphold them.”

Hudnell noted that the BLM protests following Floyd's killing were aimed at a long history of violence.

“The continual extrajudicial murder of black men and women has plaqued our democracy since its founding, and yet the BLM protests did not advocate for the destruction of our system but rather for accountability within it.”

Biggers also expressed concerns at comparisons of the Jan. 6 incident in the nation's capital along with the BLM protests across the country.

“It’s not like a protest that has escalated due to somebody receiving excessive force," Biggers said of the Washington D.C. riot. "It [the riot] was an intentional ambush that began that way.”

As rioters breached the nation’s Capitol, the difference was evident in the number of police officers and amount of force that was used in Washington compared to the summer's Black Lives Matter protests.

“Another major difference of course is the amount of police presence considering some of the police were the people involved in the riot,” said Biggers. He pointed out that many people “regardless of their racial or ethnic background were killed during the Black Lives Matter Protest." Already by early June the number killed in the protests was thought to be between 12 and 19.

Americans in November 2020 elected a new president. Donald Trump refused to concede, calling on his enablers and supporters to overthrow the result, leading to the Jan. 6 attack on the U.S. Capitol.

Twitter and other social media networks decided that they had enough of Trump using their platforms to lie, incite violence, and to divide the country more than what it is. Therefore, he was temporarily banned. Was this a violation of Trump's First Amendment Rights?

“Somebody that is in a position to speak for an entire country should not necessarily be saying certain things on a political page that is a risk to the people of the country,” said Biggers.

“I think it’d be different if he was not posing a possible threat to the American people, but as far as in revoking it... America does not negotiate with terrorists, domestic, or nondomestic and that’s what his actions came off as.”

An "attempt to stop the transition of power"

Betterson said she was shocked and disappointed by the Jan. 6 riot at the Capitol.

“Americans have never been monolithic; we’ve always had our disagreements about politics, but the riot at the Capitol was something much different,” said Betterson. “That was not free speech or political dialogue, it was a violent attack on our democracy and it was absolutely devastating to see something as sacred as the halls of our democracy attacked by people who should have understood and respected everything that they represent.”

Betterson also addressed the comparisons of the Jan. 6 incident and the Black Lives Matter summer protests, saying the two cannot be compared.

“What we saw on the 6th was an insurrection -- plain and simple. It was a group of individuals who, under the guise of “protecting democracy”, executed a deliberate attempt to stop the transition of power and attack America’s lawmakers,” said Betterson. “The Black Lives Matter protests that happened in the wake of George Floyd’s murder were just that - protests. They were overwhelmingly peaceful and they were led by individuals who sought to put an end to the constant shootings of people of color by police.”

Jury selection is currently underway in the murder trial of Derek Chauvin, the former Minneapolis police officer charged in the death of George Floyd.