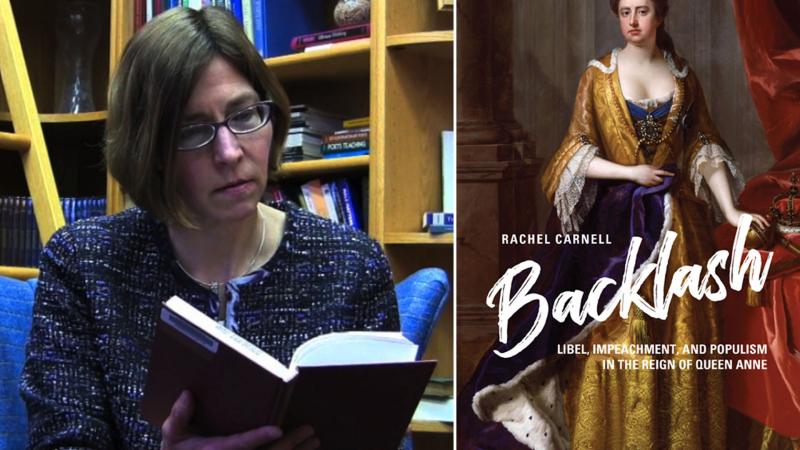 CSU Professor Rachel Carnell's new book, Backlash, tells the story of the reign of Queen Anne and its relationship to the fall of the Whig government.
By TABITHA TIMMS

Backlash, published Nov. 10, is Carnell’s follow-up release to her 2006 book, A Political Biography of Delarivier Manley.

Backlash tells the story of the reign of Queen Anne and its relationship to the fall of the Whig government. Carnell's tale contrasts with the 2018 fim, “The Favourite.”

Carnell’s version of what happened takes place in 1709 when the Whigs arrested a popular female, Tory political satirist and then impeached a provocative High Church clergyman for preaching a sermon repudiating the ideals of parliamentary monarchy and religious tolerance.

“A vivid retelling of an overlooked political upheaval whose tumult and turmoil have surprising contemporary resonances,” said Anne Somerset, author of “Queen Anne: The Politics of Passion,” about Carnell’s new book in the publisher's press release.

The impeachment trial backfired and mobs took to the streets in support of the Tory preacher and threatening religious minorities. With charges dropped against the satirist, by 1710 she had written a best-selling sequel, the press release noted.

Anne was queen when British politics was balanced between the parties, the Whigs and the proto-Brexiteer Tories. She dissolved Parliament and called for elections. This resulted in a majority for the Tories, who quickly began passing reactionary legislation.

While the Whigs would return to power after Anne’s death in 1714 and reverse the Tory policies, this little-known era offers an historical perspective on the populist backlashes in the United States and United Kingdom today.

Interested readers can get the ebook here, and the cloth version here.